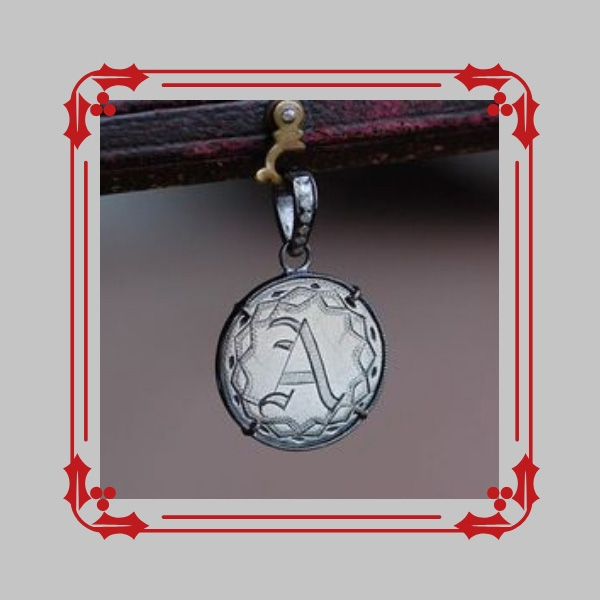 Consider the appeal of vintage jewelry and the widespread desire for jewelry that feels personal to the wearer, whether it’s a birthstone or an initial or engraved with a mantra that feels meaningful. The best charm jewelry often delivers on both concerns, with Victorian love tokens being perhaps the most perfect expression of a jewel that bears images or messages that are relevant to a modern collector while displaying visible traces of its previous ownership and history.

For the uninitiated, a love token is an antique coin that was planed down on one or both sides and embellished with names, personal messages, images, and bon mots on the other. Sweethearts and family members exchanged them as gifts; dimes were the most popular iteration here in the U.S. because sacrificing their monetary value for the sake of adornment was not considered an extravagance, when compared to say, forfeiting a more precious quarter or a Morgan dollar.

Typically, the minted words and images were removed from “heads” side of the coin.

“I found love tokens accidentally when I was searching for antique watch fobs, and as soon as I saw them I was transfixed,” says Samantha Jackson, the Atlanta-based jewelry designer behind Heavenly Vices, which has developed an enthusiastic fan base. “It was amazing to me that no one else that I could find was using these sweet little treasures in jewelry.”

Love tokens have since become Jackson’s signature, but not just because they come with built-in vintage charm and intrigue. Rather, Jackson has found a way to reimagine the trinkets as precious objects, adding diamond halos and bales to make them flicker with a little more elegance and flair or suspending them from lapis and malachite chains.

“I am from New Orleans, and we are used to taking dusty old things off the shelf, so to speak, and repurposing them to fit into our modern lives,” says Jackson.

“I’m fascinated with the artistry, sentiment, and techniques used to convert these coins into something meaningful, and I just knew that if I got these coins out there into the world, their lives could be reborn. They are too amazing to keep on a shelf or in a safe.”

Speaking of safes, after nearly four years of hunting and collecting, Jackson has amassed more than 1,000 love tokens to date—and as many stories to go along with each. Below, the select few she’s hesitant to part with, be it the rarity, the sheer intricacy of the engraving, the quirk factor, or something she has common with her customers, acutely sentimental reasons.

“Even though this has been on my Instagram, it’s my personal holy grail and is not for sale. It’s an 1877 Seated Liberty half-dollar with a menu engraved in French on the reverse. It’s so interesting and fascinating as to why someone had this done. Also, the flawless lettering—I can barely write!”

“Lord’s Prayer love tokens are very hard to come by. Two things are remarkable about this one—the coin itself is smaller than a dime. Imagine how hard it was to engrave on that tiny area. Also, we have both the engraver’s name and location. I have never seen this on any coin before.”

“A great Christmas gift because it’s marked ‘Weihnachten 1901.’ The rest of the text translates to ‘From your father’s house where you dearly slept. Hold firmly with your whole heart, here are the strong roots of your strength, there in this remote country, you stand alone, a shaky straw, crumpled by every storm.’”

“I imagine this must have been for the matriarch of a large and wealthy family. What is also interesting to me is the chain itself. I’ve never seen anything like this.”

“This is the first coin I’ve ever seen on an Indian rupee. I mostly see British, U.S., and Canadian coins. And the engraving is beautiful.”

“I have a sentimental attachment to this token. I have given my mom, one of my sisters-in-law, and best friend really amazing large love tokens with their initials (or in my mom’s case her deceased husband’s), but I never found anything really amazing for my older brother’s wife. Until this—they have a 2-year-old named Madeleine whom they call Maddie. I intend for this token to be passed down to my niece/godchild when she is old enough. Continuing the life of this coin as it should have been from the get-go.”

Top: We’ve highlighted the most prized love tokens in Jackson’s collection, but plenty retail for less than $1,000. Rimmed in a milgrain bezel instead of a diamond halo, this one is $400 (image via: @jeanjeanvintage).