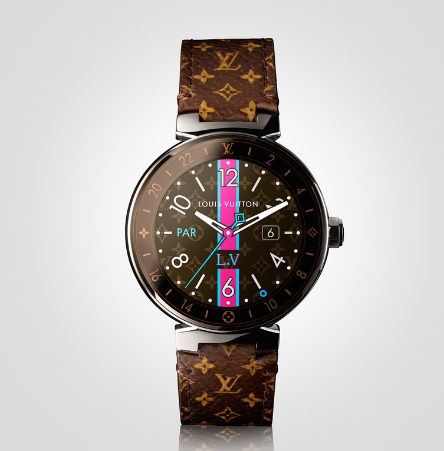 The wearable device industry is in a period of consolidation. Fitbit gobbled up Vector and Pebble this year, and it is planning to release its first smartwatch soon using the hardware know-how it acquired in the process.

And Apple’s enduring dominance in the smartwatch category has (indirectly) resulted in the sad demise of more than a few once-promising smartwatch startups.

Yes, the global market for smartwatches could reach $32.9 billion by 2020, according to Allied Market Research. But it’s just as true that far fewer people on the planet have shown an interest in strapping minicomputers to their wrists than many initially estimated.

The category simply hasn’t popped on the consumer level the way the nascent industry hoped it would.

But apparently, none of that was a deterrent for luxury powerhouse Louis Vuitton, which launched its first-ever smartwatch this week: the Tambour Horizon. 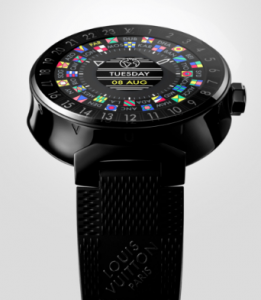 Top and above: Two of three styles of Louis Vuitton’s first smartwatch, the Tambour Horizon

According to Business of Fashion, the drum-shaped device runs on Google’s Android operating system and is a part of Vuitton’s Tambour fashion collection. They also report that the watch is highly customizable, with three case styles, 60 interchangeable straps, and a variety of different watch faces (available as downloads).

“We don’t know where the industry of connected objects is going, but we know it’s going to be massive,” Louis Vuitton chairman and chief executive Michael Burke told Business of Fashion. “You can either sit on the sidelines and observe, or you can dive in and be an actor.”

Reportedly, the Tambour Horizon will become Louis Vuitton’s entry-level timepiece; prices start at $2,511 for the actual watch and $303 for a strap.
The outlet noted that the brand is playing up its luggage and travel heritage within the device, offering the label’s proprietary city guides and “a seamless experience across both Chinese and Western apps.”
But there’s a reason all three models are covered in the famous LV logo—the Tambour Horizon is as much a fashion accessory as it is a workaday wearable.
The watch was wisely designed with longevity in mind, but not in terms of its technology. Long after its techie insides time out, its appeal as a coveted luxury good (and, no doubt, a fashion collectible) will remain.
Follow JCK on Instagram: @jckmagazine
Follow JCK on Twitter: @jckmagazine
Follow JCK on Facebook: @jckmagazine