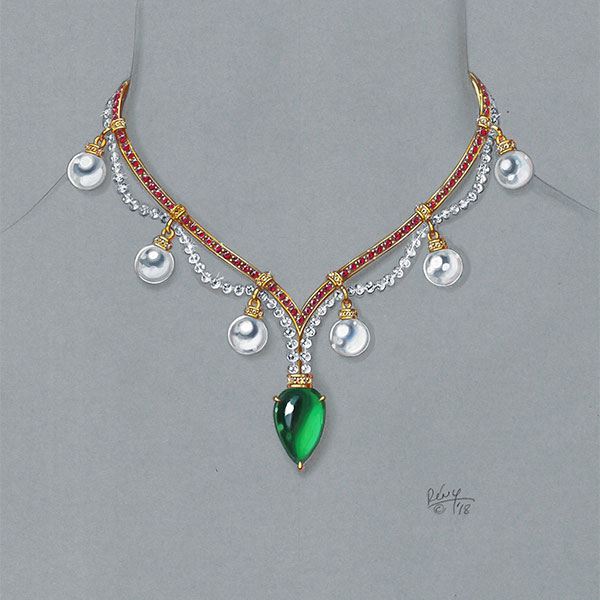 At the upcoming Atlanta Jewelry Show (March 7–9), attendees will have a rare opportunity to take a free class with one of our industry’s most prolific and talented jewelry-rendering artists and designers, Rémy Rotenier.

In honor of the class (register here, space is limited to 25), which will take place during the preshow conference on Friday, we asked Rotenier to share five favorite examples that highlight his expert technique, its evolution over the years, and how the rendering process allows him to tell a richer story with his designs.

“I have done mini classes and presentations on freehand rendering before at trade shows, but this is the first time that I’m actually giving a free half-day class,” says the French-born (and trained), Santa Fe, N.M.–based designer. “I never know if people are going to want to spend the time learning to freehand design. CAD seems to be the way people want to learn design, yet there are great advantages to designing by hand.”

According to Rotenier, these include: no machines needed, the ability to draw anywhere with minimal tools, and the fact that the artistic process can bring about a more visceral connection between you and the design you’re creating.

Plus, says Rotenier, “There is a clear resurgence for the appreciation of jewelry renderings from the clients and professionals.”

After combing his encyclopedic archives, here are the works Rotenier wanted to share with JCK readers.

“At 19 I was told I was too old to learn the bench (students usually started at age 15 or 16), but design was available. I had been studying visual arts and had recently joined the French institute of gemology, so designing jewelry made the most sense. I was madly in love with gem identification, and drawing was my favorite thing to do: I was in heaven. I painted this necklace as a student of the BJOP, also known as L’École du Louvre.”

“As a young designer I had the chance to create two hugging pavé diamond koala bears for Graff. They became a bit famous, and I never forgot it. Years later, my [late] brother [Robin Rotenier] had given me two of those fuzzy koala bears that you could clip on your lapel. One day I put them together as if they were hugging, and I saw the piece of jewelry they could become in my mind. Years later I designed this Bear and Monkey brooch as a reminder that as different as two people are are, they can still be friends.”

“This men’s ring was designed to celebrate the 10-year anniversary of the first lunar landing by Apollo 11 and my first memory of television. My parents bought a TV set for the event, and we sat in front of the screen totally mesmerized.

“Additionally, this sterling silver and moonstone ring was produced and featured in the Albuquerque Now exhibit at the Albuquerque Museum in 2009—my first piece of jewelry in a museum. The actual landscape of the landing area inspired the carving of the original wax, which features the famous footprint of Neil Armstrong.”

“I enjoyed [working on] the Rémy Rotenier for Bella Luce collection on Jewelry Television for five years. I created the Rémy cut, which resembles a European-cut stone with a smaller table and a steeper crown, but the pavilion is a modern brilliant cut sending the light back very nicely. This ring was the first Rémy-cut oval to be set east/west.”

Top: Holiday 2018 emerald cabochon and ruby necklace. “The drawing was done on my French gray paper, then scanned, and the painting part was done on my iPad with the Apple Pencil,” says Rotenier. “It was still a freehand design, but the advantage was that you could zoom in on the details to give them a lot of definition. Then when you zoomed back out it would be crisp and sparkly. This design got the most likes ever on my Instagram account!” Attendees of the Atlanta Jewelry Show have an opportunity to take a free half-day class with Rotenier on Friday starting at 1:30 p.m.