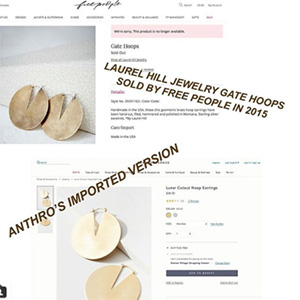 Jewelry designer Laurel Hill took to Instagram Monday to voice her outrage at Anthropologie after she discovered the retailer had been selling a pair of distinctively designed hoop earrings that were clearly knockoffs of one of her longstanding earring designs, the Gate Hoops.

Hill’s brass hoops retail for $96 to $388 on Laurel Hill Jewelry. Anthropologie’s knockoffs, before being removed from the site yesterday, retailed for $38.

Hill posted a photo Monday of the two items side by side with a caption that read:

“WHAT THE F*** @anthropologie. This is so rude. I’m a person! You’re a collective of people! Somewhere in there, someone was like ‘WOW we like these earrings but we don’t want to support the designer or living wages or being decent humans so please send this ‘inspo’ pic of the original design to our factory overseas for cheap manufacture.’ DUDES COME ON. In the spirit of human-to-human interaction, I tried reaching out to the buyer a few times and…crickets. I honestly expected more.”

Hill has a history of working with the company. Sibling retail brand Free People sold several of her designs in 2014 and 2015, and “they offered to reorder some of my other hoops they were carrying, but at a fraction of the wholesale price,” Hill said in the Instagram post.

“I couldn’t swing it and still cover expenses, so I declined. These hoops were pictured in that email exchange, as well as being present on every line sheet they’ve received and used to place orders.”

Hill told JCK that when she saw the knockoffs a few weeks ago, she sent the buyer “a polite email asking to speak with someone about it,” then, “followed up a few days later and never received a response. I still haven’t received a response. I hadn’t planned on posting anything to social media, but every time I saw an Anthro ad, the anger came back, so I really just wanted to get it off my chest.”

After several media outlets, including Refinery 29, reported on the story, Anthropologie removed the product from its website. Hill is currently ruminating on whether or not to pursue legal action against the company.

“Please continue to support independent artists,” the designer wrote on a follow-up Instagram post, “and that doesn’t necessarily mean buying our work if you can’t afford it (I mean we know our s**t ain’t cheap, but there’s a legit reason for that and we can’t compete with Walmart prices). You can help by trying not to support companies that exploit people (which I know is SO HARD in this world), sharing posts, even ‘liking’ and commenting is so helpful, it shows them that we’re paying attention.”

Hill ended her post with a cheeky hashtag: #nottodaysatan.