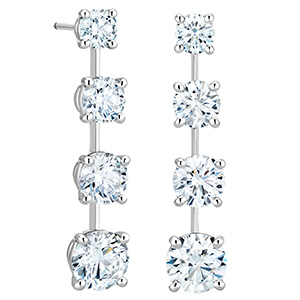 According to De Beers’ annual survey, U.S. diamond jewelry sales increased 4 percent in 2017 to $43 billion. The company partially credits the good results on the growing self-purchase market, which it says accounted for one-third of all diamond jewelry purchased last year.

Jenny Luker, president of Platinum Guild International USA, says, “It was a really good year [for platinum], and it’s been a really good few years.”

She adds that while the American economy has played a role in the strong results, much of the credit has to go to the historically low price of platinum, which at press time was trading for $892 an ounce, about $400 less than the price of gold.

And while bridal remains the basis of the platinum market, Luker says that her organization wants to take advantage of the growing self-purchase sector by encouraging manufacturers to produce platinum fashion product.

PGI predicts that platinum jewelry sales will continue to grow in the United States in 2018 by an estimated 8–11 percent.

The global gold jewelry market increased 4 percent in 2017. That is the first year of growth since 2013, according to the WGC.