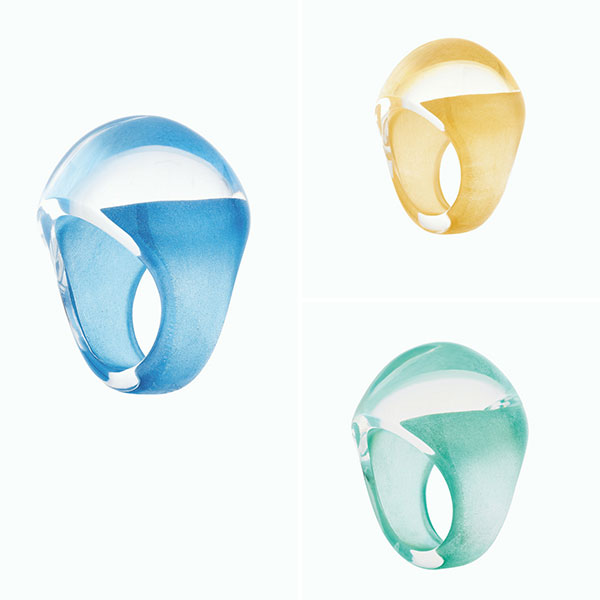 There are the poisson figurines and Art Nouveau perfume bottles and magnificent vases and decorative sculptures, but for many, the enduring emblem of Lalique’s transcendence is its iconic cabochon ring. Whimsical and sculptural, it blends bits of Art Nouveau and Art Deco in a petite design of carved crystal, rounded and sensuous in shape, and sometimes finished with fluted detailing or a hand-painted wash of shimmering patina.

The cabochon ring remains one of Lalique’s most recognizable designs, and the house has just released it in five new colors—a soft palette reminiscent of semiprecious gemstones like rose quartz, moonstone, and amazonite.

Originally designed in 1931 by founder René Lalique, the cabochon ring was borne from a visit to the French town of Chartres—“to see the most beautiful blue in the world,” according the memoirs of Nicole Maritch-Haviland, Lalique’s granddaughter. (The blue in question refers to the hue on display in the famous cathedral’s stained glass windows.) Upon seeing the color, Maritch-Haviland asked her grandpère to create a ring for her in the same shade; some time after the visit, Lalique designed a ring shaped like a drop of water made of sapphire-blue glass that came to be known as the cabochon ring.

…and engraved with various motifs.

According to a 1997 article in The New York Times, the cabochon ring was discontinued at the start of World War II and reintroduced in 1992.

The five new colors take the total of cabochon options to 17.

Each ring retails for $160, making it one of our industry’s finest examples of attainable luxury. At this price, the jewel-box staple has a certain “collect them all” appeal, as a child might stockpile agate marbles in a velvet pouch.

The current print advertisement, pictured below, plays to this idea, inviting clients to “join the game.”

Top: The Lalique cabochon ring in three of five new colors, $160 each