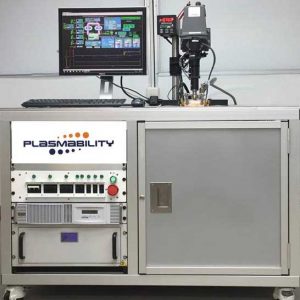 A new company on the diamond-growing scene tells JCK that its patented method can create lab-grown diamonds cheaper and with more energy efficiency, thanks to technology originally used in the semiconductor business.

Austin, Texas–based Plasmability will, like most producers, grow gems with the chemical vapor deposition (CVD) method. The difference is, its self-produced reactors use toroidal radio frequency in addition to the standard microwave technology. President and chief technology officer William Holber says the toroidal technology will ultimately be able to produce more diamonds at less cost and scale production more efficiently.

From an eco standpoint, the toroidal method is more energy efficient, he says. “The typical microwave efficiency is about 50 percent efficient, so you lose about half the power. Our generator technology is about 85 percent efficient. We are a much better utilizer of electricity.”

Unlike the standard hype-spouting head of a tech business—and in particular, a lab-grown diamond business—Holber wasn’t full of grand production predictions.

“We have a facility ready to go that can house 70 to 100 reactors,” he says. “I could make up a [production] number, but I don’t really have an answer right now. We’ll be producing by the end of the year. I’m not sure of the quantities.”

Most of the production will be between 3 and 5 cts., though he adds, “it’s a bit early to say what our sweet spot will be as far as quality.”

Holber founded the company with CEO Robert Basnett in 2010. Both had backgrounds in the semiconductor business, and they believed the technology could apply to growing diamonds. Up to now it has been producing non-diamond-related products for the semiconductor manufacturing industry. But it also had its eye on growing gems.

“We thought it was an interesting area for a small company to get started in,” Holber says. “It’s kind of the Wild West now. There’s a lot of opportunity. Right now, lab-grown is a very small part of the gem market. So there’s a lot of room to grow.

“Eventually you expect [the market] to be a little more commoditized, and prices will become more stable. Our goal is to have equipment that is not just competitive today but down the line.”

Plasmability, which plans to sell only rough in a sightholder-type system, has numerous patents for this process and is looking for investors. But even though it is still very much in launch mode, Holber says the industry is interested.