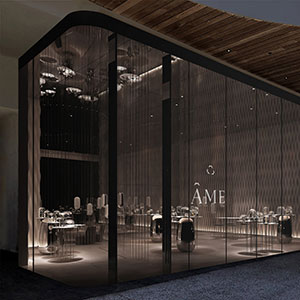 The Los Angeles store is located in the Westfield Century City mall, while the New York City store is located on Spring Street in SoHo, down the street from Kendra Scott. The company, named for the French word for soul, will also sell online.

Alex Popov, the industry veteran who is CEO of the new venture, says that his company will use white diamonds produced by the company in a factory in Long Island City, N.Y. He declines to speculate on how much it will produce, saying that depends on how well the jewelry is selling.

“We will manufacture only for our own consumption,” he says. “Our plans are to install between three and five machines to work at full capacity.”

As he admits, Popov is an unusual person to be involved in a lab-grown diamond venture. He is the current president of the Moscow Diamond Bourse, and he previously served as the chairman of the World Diamond Mark Foundation, a venture of the World Federation of Diamond Bourses.

Popov says what sets his venture apart from others is that he has no plans to sell bridal. Instead, his brand is all about fashion and expanding the range of pieces that are out there.

All the jewelry is designed by creative director Elinor Avni, who previously cofounded and designed for jewelry brand Noritamy.