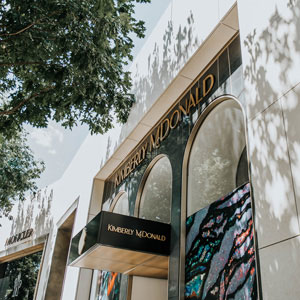 On Monday, fine jewelry designer Kimberly McDonald announced that Saturday would be the opening day for her branded boutique in Atlanta’s Buckhead Village outdoor shopping center.

Sandwiched between Christian Louboutin and Moncler stores, the boutique is the second brick-and-mortar location for the designer’s namesake brand, which also operates a shop inside the Collective at Fred Segal store in Los Angeles.

McDonald launched her collection in 2007, and it was legitimately pioneering at the time due to her use of vividly colored gemstones (many of them still considered semiprecious at the time) as the center-stage element in her designs. We’re talking about a time when colored stones were so sidelined, they were almost a specialty business for jewelers and jewelry retailers.

Thirteen years later, McDonald is still designing beautiful, bespoke gemstone jewelry. But she’s also channeled her passion for stones into an emerging lifestyle brand that includes gem/geode-themed wallpaper—designed by McDonald in collaboration with Jamie Adler of Phyllis Morris—home decor extensions and a loungewear and resort-wear collection, a partnership with an Italian manufacturer that also makes apparel for Gucci, YSL, and Armani.

McDonald said in a recent JCK story that she “tends to be a nomad,” and she now lives part-time in Atlanta, where she lived after college. The company’s headquarters have been and still are in New York City, and she also spends time in Los Angeles.

As part of the announcement of her Atlanta store, the designer shared that she will center her e-commerce operations in the Southern city moving forward. “It’s so exciting for me to return home to open my e-commerce business here, as well as my own store at Buckhead Village,” she said in the same statement. “It’s exciting to see the changes in the overall area over the past 20 years, especially in this property—which houses some of the most reputable luxury brands in the world.”

She added, “This is also a new chapter for us and an exciting time, despite recent events. Atlanta doesn’t really have a space quite like this, and I’m excited to share what we are doing at Kimberly McDonald with Atlanta’s most evolved and sophisticated [shoppers]. The magnetic energy of this partnership is undeniable.”

The Kimberly McDonald boutique at Buckhead Village will be open 10 a.m.–7 p.m. Monday through Saturday and 12–6 p.m. on Sundays.