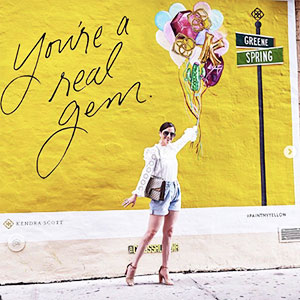 Kendra Scott, the jewelry retail brand founded by entrepreneur Kendra Scott in 2002 that Berkshire Partners valued at $1 billion in December 2016, is opening its first-ever store in New York City on Sept. 4—a 1,700-square-foot, two-story flagship at 126 Spring St. in SoHo.

Of course, the Austin, Texas–based brand has had a presence in the city for years—it feels like there are few places the rapidly growing brand isn’t these days.

Kendra Scott maintains a showroom in New York City’s Fashion District, a bustling shop-in-shop in Bloomingdale’s, and it recently hosted a successful pop-up store in the Hamptons.

The company has played out a sustained marketing campaign in advance of the opening—on social media, but also via clever on-the-street advertising. It’s a proprietary marketing mash-up aimed at millennial women that the brand, at this point, has mastered.

Beginning last year it hosted activations throughout the city, hyping and documenting them on social with the #PaintNYYellow hashtag (there was a Mother’s Day Surprise & Delights party in Central Park, for one).

A painted yellow mural scrawled with the phrase “You’re a Real Gem” invites fans and would-be shoppers to post a photo of themselves standing in front of it on Instagram, using the #PaintNYYellow hashtag. The brand has also partnered with local influencers on paid posts showcasing the mural.

The philanthropic jewelry company has also partnered on recent events and initiatives in the city with organizations including Breast Cancer Research Foundation, Memorial Sloan Kettering, Glam4Good, Good+ Foundation, and through its Kendra Cares program.

It’s tough to imagine how the company could have better prepped for its official entrée into NYC. In a prepared statement, Scott said, “Kendra Scott has always been thoughtful about how we introduce our brand to this market…. Love for the brand has been steadily growing in New York City, and we’re excited to bring a bit of Austin, Texas, to the Big Apple.”

If all goes well, the store will be the first of several Kendra Scott shops in New York City: “Our goal is to continue to expand our footprint now that we have our first store in SoHo, but to do it in the right way,” said Scott, adding that “continuing our expansion over the pond” is also central to the company’s growth strategy.

The store will host several events in its first few weeks, including a Summer Friday breakfast for shoppers (featuring breakfast tacos) that will kick off a collaboration with nail art brand Paintbox and a “Keep Austin Weird”-themed day.

The store will carry the full Kendra Scott collection, including fine jewelry, the brand’s lucrative Color Bar (one on each floor), home goods, candles, and nail lacquer.

It was designed “with NYC in mind,” said Scott in the statement, “from the custom features and terrazzo floors to the Venetian plaster and NYC-inspired art specially curated to evoke the spirit of the city.”

Scott, whose personal worth was estimated by Forbes this year to be $500 million, is already embedded in the city’s philanthropic scene.

The business donated $4.7 million dollars to charitable organizations (including its own) in 2017—several of which are based in NYC—along with $10 million in in-kind donations and more than 2,000 volunteer hours.

Top: An influencer’s ad on Instagram capturing the mural painted on the side of the Kendra Scott store in SoHo (image via: @alina2189)