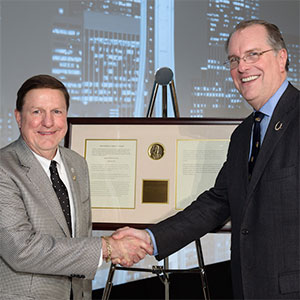 The award, AGS’ most prestigious honor, is given to those who demonstrate a significant contribution to the science of gemology or for “exemplifying the high purposes, objectives, and ideals of the American Gem Society in the member’s own community,” according to organization literature.

Newton was presented the award yesterday at a lunch sponsored by the Gemological Institute of America (GIA) on the final day of AGS’ annual Conclave educational event in Seattle.

“Kelly sets the standard for what an AGS jeweler should be and what the Shipley Award stands for,” said Doug Parker, a past president of the AGS board of directors and current chair of the Robert M. Shipley Nominating Committee, in a prepared statement. “He gives freely of himself to AGS, the industry, his community, and his church. We are very proud to honor him.”

Newton is the third-generation owner and president of Newton’s Jewelers and has been a member of AGS for 25 years. In 2010, he began serving on the board of directors and he has served as chair of its membership committee since 2014. Additionally, for the past seven years, he’s led the society’s Grievance and Review Committee.

Founded in 1914 by Kelly Newton’s grandfather, George H. Newton, Newton’s Jewelers has been a stalwart small business in the Fort Smith region for more than a century.