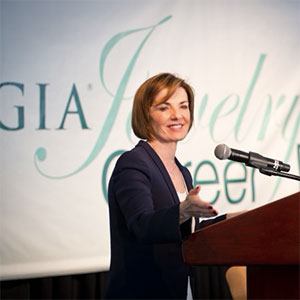 Kathryn Kimmel, senior vice president and chief marketing officer of the Gemological Institute of America (GIA), will retire on Aug. 30, the organization has announced. Kimmel has been with the GIA for 29 years.

The third-generation jewelry professional played a key role in shaping GIA’s global marketing, public relations, and communications strategy. Her most visible achievement, according to GIA, was developing the institute’s ongoing consumer outreach campaign to help consumers understand the Four Cs and the GIA’s independent gem identification and grading reports.

Susan Jacques, GIA’s president and chief executive officer, said in a statement, “Millions of consumers across the world have confidence in their gem and jewelry purchases because Kathryn had the insight and drive to reach them with independent, credible, and research-based knowledge about diamonds, colored stones, and pearls.”

Kimmel also founded the GIA Jewelry Career Fair in 1991, which has expanded in the last 28 years to India, Las Vegas, London, New York, and Carlsbad, California. That same year, she became the cochair of GIA’s International Gemological Symposium and was the “driving force” behind six symposia since, including the most recent one in October 2018 in Carlsbad, according to GIA.

“My heart will forever be with the students,” she said in the same statement. “Seeing them study at GIA, coming to GIA’s Jewelry Career Fair, and becoming industry leaders has been one of the most rewarding parts of my job.”

During her career, Kimmel received YWCA’s Tribute to Women and Industry (TWIN) award, the American Gem Society’s Distinguished Service and Triple Zero awards, the GIA Richard T. Liddicoat Award for Distinguished Achievement, the 24 Karat Club Excellence in Service Award, and the Women’s Jewelry Association (WJA) Award for Excellence in Promotion. She is also a member of the WJA Hall of Fame.

Tom Moses, GIA’s executive vice president and chief laboratory and research officer, added in the statement, “Kathryn’s expertise, guidance and unerring dedication to GIA’s mission helped to make our Institute what it is today.”