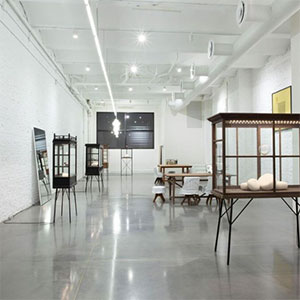 A few weeks back, Anis Boudraa, chief operating officer of handmade Japanese fine jewelry brand Kataoka, told me the company’s first-ever store outside of Japan, in New York City—which at the time of our conversation was being painted and shellacked while awaiting furniture that was being shipped from Japan—would probably be very different from stores American shoppers, even retail-jaded New Yorkers, were accustomed to.

And while the 1,600-square-foot boutique in Tribeca has the requisite white walls and polished concrete floors endemic to lots of downtown Manhattan stores, Kataoka’s new retail temple does feel exotic.

The white brick walls, which are softly lit by a chandelier featuring fluorescent tubes hand-blown in Japan, stretch on for days, with no hanging pictures or objects to break up their expanses. A few have been texturized with Japanese plaster, creating an effect that’s industrial, but not in that soulless commercial way. As with Kataoka’s delicate jewels, all that blanked-out brick radiates a romantic, historic vibe.

The spindly-legged jewelry cases are vintage and Japanese-made and similarly straddle that design line between industrial-pragmatic and storybook-ethereal. Most of the furnishings were originally built for other purposes, says Boudraa—to hold tobacco or medicine or to showcase swords and other weapons.

Company founder, designer, and goldsmith Yoshinobu Kataoka, “only wanted display cases that are antique that have a beautiful patina,” says Boudraa. “They really reflect the theory of Kataoka—working with something that’s old.” (All gold used in Kataoka jewelry is recycled from the Japanese semiconductor industry.) “Our designer hates fast fashion and everything that’s related to fast consumerism.”

The COO, who originally met Kataoka when he answered an ad for an English tutor (Boudraa was working on his PhD in Japan), says the brand has been looking to open a store in New York City “for a very long time—we really looked for a space for two years,” and adds that Tribeca quickly became the neighborhood of choice because “it has that historic feel we wanted.”

Kataoka already has a charmed presence in New York retail—the brand is stocked at Catbird and ABC Carpet & Home, two of the world’s most influential fine fashion jewelry sellers.

But Boudraa laughs slightly when he talks about the huge difference between Kataoka’s only other stand-alone store—an unassuming 700-square-foot shop adjacent to Kataoka’s workshop in suburban Tokyo—and the ultra-curated U.S. flagship.

“It’s funny thinking about going from this suburban area in Tokyo to the middle of New York City—there’s this huge gap,” he says. “We decided that this with this one, we’re going to go bigger and really make it a retail temple. We already have retailers here in the U.S., but we want them to experience the feeling of this store.”

The brand has no immediate plans to increase its retail presence; the jewelry itself dictates restraint there: “Everything is handmade, so we cannot mass-produce it and have 60–70 retailers selling it,” explains Boudraa. “Either the quality of the product will decrease, or we won’t be able to supply to everyone. It would make our customers frustrated. We try to control the distribution so our retailers understand exactly what the brand is about and how to present it.”

Kataoka’s bespoke production chain—and delicate (almost sweetly so) designs that clearly bear the marks of handcraftsmanship—is precisely why jewelry lovers have flocked to it since Kataoka raised his shingle in 2011.

“I think people are tired of big brands making trash jewelry that you buy and throw away,” says Boudraa. “Our designer has been making beautiful things for 25 years. He’s interested in making jewelry that survives him.”

Top: Inside the new Kataoka store in New York City (all photos courtesy of Kataoka)