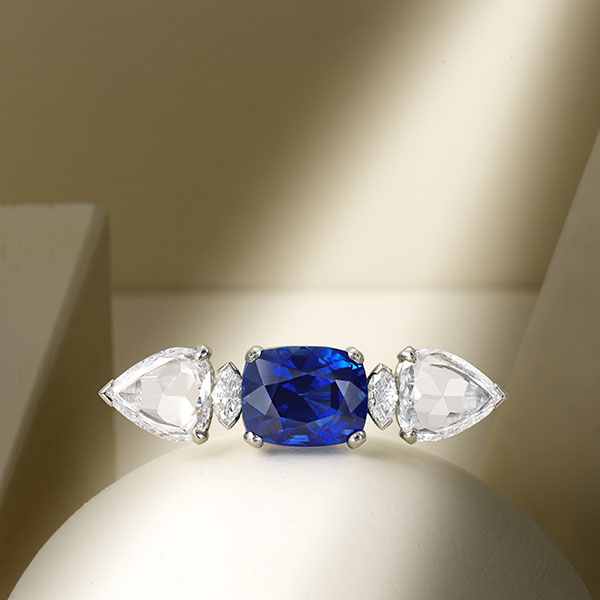 On Dec. 7, a belle epoque platinum brooch set with a Kashmir sapphire—bearing two certificates, one from AGL, and the other from the Gübelin Gem Lab, describing its color as “royal blue”—will hit the auction block at the Bonhams New York Jewels sale.

This is not your typical Kashmir sapphire. The gem weighs an eye-popping 17.21 carats. It’s flanked by four diamonds remarkable in their own right, including two sizable table-cut pear-shape gems. It’s valued between $500,000 and $800,000. And it has excellent provenance.

“What’s cool about it is the history,” says Emily Waterfall, head of jewelry at Bonhams in Los Angeles. “It’s from a Northeastern political family. The patriarch was the governor of Vermont during the Civil War and one of the founders of the Northern Pacific Railway. His wife’s father was involved with the Underground Railroad. Their son, also the governor of Vermont, purchased it for his wife at the turn of the century. It was worn to Nixon’s inauguration by the consignor’s mother.”

“You can see the depth of the stone, an indicator of a great estate piece,” Waterfall says.

What’s more, the gem comes with a letter from Gübelin that says the sapphire “possesses a richly saturated and homogeneous colour, combined with a high degree of transparency, and a finely proportioned cut. In addition, this remarkable gemstone has been spared of thermal treatment. Such a combination of characteristics is rare in natural Kashmir sapphires of this size.”

It should go without saying that of the 180 pieces in the Bonhams sale, the Kashmir brooch is the star lot. But it’s far from the only one set with spectacular colored stones.

A pendant centered on a carved Mughal emerald, circa 1915—estimated at $40,000–$60,000—features a French assay mark as well as a maker’s mark for Georges Le Saché, a turn-of-the-century designer and manufacturer who made highly regarded jewelry for Boucheron and Tiffany & Co.

The diamond-set piece tells a story of “grand adventures,” Waterfall says. She alluded to the fact that in the years leading up to the beginning of the art deco era, around 1920, Western jewelers such as Jacques Cartier traveled to India and the Persian Gulf to source exotic gems that would become central to the emerging style. The Le Saché pendant with the carved emerald is not a Cartier jewel, but it boasts all the same evocative qualities.

One of the sale’s most stylish lots is a malachite and carnelian necklace in 18k gold by the late, great Aldo Cipullo—the Italian-born designer who created the iconic Love and Juste un Clou bracelets for Cartier. The piece, which is estimated at $25,000–$35,000, is undated, but it screams 1970s chic.

Finally, a diamond-, ruby-, and sapphire-set gold double horse head bangle, circa 1960, by Bulgari—expected to fetch between $30,000 and $50,000—is notable for its singular take on a familiar style, the open hoop gold bangle with twin animal heads.

“What distinguishes the Bulgari bangle from the ancient prototypes and the more recent American examples is the fact that the double horse heads overlap on top of the wrist rather than being arranged head-to-head facing one another,” writes jewelry historian, author, and Bulgari specialist Amanda Triossi in a catalog footnote. “Furthermore, the Bulgari version was not extensively repeated, making it a fairly unique house jewel.”

Champing at the bit yet? Good. So are we.