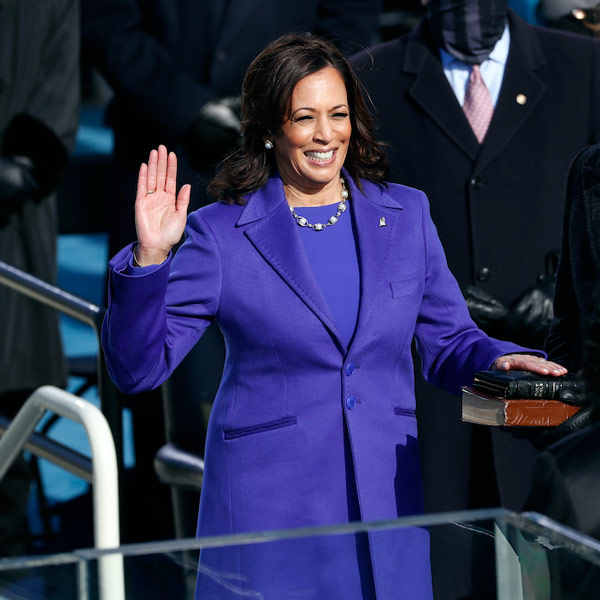 Yesterday’s inauguration of the Biden-Harris administration, in Washington, D.C., was an all-day visual feast that ended with a radiant display of purple fireworks. Further beautifying the festivities were some pretty incredible jewels, worn by political figures and celebrities alike.

The scene-stealer on the jewelry front was, naturally, Vice President Kamala Harris, who donned a new pearl necklace for the swearing-in ceremony that was custom-designed and produced for her by W.Rosado. Wilfredo Rosado, founder of W.Rosado, is a fashion industry veteran who was a protégé of Andy Warhol’s and served as fashion director for Interview magazine under the iconic artist.

Harris is seemingly never without a string of pearls, often rotating her strand of black Tahitian pearls with a gold-and-pearl station necklace designed by Irene Neuwirth. Her decades-long affinity for the luminous gem stems from her time at Howard University, when she became a member of Alpha Kappa Alpha, the first intercollegiate historically African American Greek-lettered sorority. Pearls are the emblem of the sorority.

The bespoke design feels original, but also grown-up. It broadcasts a stateliness that aligns perfectly with the long history of pearl-wearing in U.S. politics. Pearls have been ubiquitous in D.C. since the 1960s, when Jackie Kennedy turned the simple pearl strand into a major fashion statement. Sitting congressional members Nancy Pelosi, Lisa Murkowski, Maxine Waters, and Susan Collins are among the many legislators who regularly wear pearls.

The new vice president’s team approached Rosado, who has been innovating with pearls for years, to create a necklace that would be eye-catching and feel meaningful. Harris, Rosado said in a prepared statement, “embodies the diversity and spirit of this country and I am so proud of her progress. Pearls are an obsession for me and I’m always striving to find new ways of working with them.”

In a show of solidarity with Harris—the first woman, Black woman, and South Asian woman to serve as vice president of the United States—several other female politicians and performers donned pearls for Inauguration Day.

The first lady, Dr. Jill Biden, wore a blue dress and coat designed by Alexandra O’Neill, founder of emerging New York City fashion brand Markarian, that was embellished with Swarovski pearls and crystals (you can see a close-up of the collar here). Former first lady Laura Bush wore a long pearl necklace over her gray shift and light blue coat.

Lady Gaga, who sang the “The Star-Spangled Banner” in a voluminous Schiaparelli ensemble that drew mixed reviews (this reporter loved it), wore a gold dove of peace brooch that covered half her clavicles, custom-created by the atelier for the occasion. But Jennifer Lopez, who also sang at the ceremony, wore stacks of Chanel pearl bracelets and round pearl earrings featuring Chanel’s bold interlocking-C logo. She looked flawless, as usual, but many felt she missed an opportunity to showcase an American fine jewelry designer who works with pearls.

Capping off the series of performances that were part of the evening’s Inaugural celebration, pop singer Katy Perry belted her hit “Firework” in front of actual fireworks (see her performance here). And the pop singer’s earrings—hefty Rahaminov diamond drops featuring huge heart-cut diamonds that she and her styling team specially commissioned for the occasion—were as mesmerizing as the pyrotechnics.

Top: Vice President Kamala Harris in the W.Rosado pearl and diamond necklace custom-made for her (photo by Daniel Acker/Bloomberg via Getty Images)