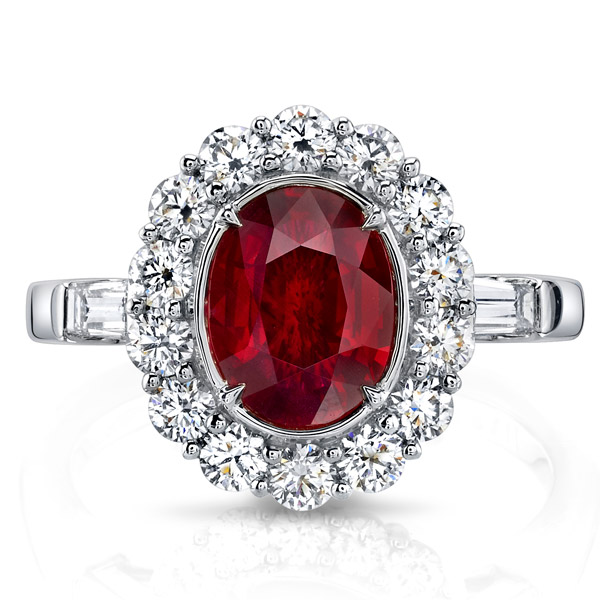 “Do people even wear rubies anymore?” my husband asked me, as I was sharing my thoughts on whether to write about July’s birthstone this month. He continued his query by pointing out that “red clashes with most other colors,” and that it “brings out the redness in some people’s skin.” Well, I guess we know where he stands on ruby.

For me, the ruby, a member of the “precious three,” as I like to remember the first colored gemstones I ever really learned about, is more elusive. It’s not that it’s hard to find, but, rather, I can’t quite grasp my feelings about it.

My grandfather used to wear a red gemstone ring, as far back as I can remember. I always thought it to be ruby. When he passed away, I took it to a jeweler to get reset as a gift for my cousin—only to find out it was glass. I’m not saying it’s ruby’s fault, but I count that as a strike against it, nonetheless.

Working for a retailer in the South, I learned that, allegedly, rubies were a gift men gave to their mistresses. Instantly, the stone took on a scandalous vibe. Who wants to be branded with that sort of unspoken label? I may have found myself slightly suspicious of men in the market for rubies for a while after that.

In the last eight years since I’ve been with JCK, my skepticism for ruby has begun to shift. I’ve experienced moments where the stone has taken my breath away—truly gasping at the sight. I’ve seen rubies combined with unexpected gemstones—like pink tourmaline or tsavorite—for a look that proves its red can stand up with some of the richest colors and coexist beautifully. I’ve seen how happy those mistresses are made with their gifts of ruby. Okay, just kidding about that last one.

At JCK Las Vegas this year, a ruby ring on display at Andreoli (above) caught my eye. I was instantly in awe of it, despite my inner voice saying, “Really, a ruby, you?” But yes, really. And it wasn’t the first time I’ve been more than enthusiastic for the stone. And I think that’s where ruby wins me over: Though I’m often averse to it, I’m extra enthusiastic when it pleases me—so much so, I might venture to call it love.

So, do I love ruby? Maybe select rubies, yes. One thing I know to be true is that I no longer underestimate them, and I can’t brush them off. Writing this reminds me of the fact that jewelry isn’t simply a luxury object that exists as a status symbol, as some may be unwise to think. Jewelry—and gemstones—are like art, stirring thoughts and feelings and opinions, speaking to us on a very personal, intimate level. So, whether you love or loathe a certain gemstone, or even if you fall somewhere in between like I do in this case, how wonderful it is that these treasures exist to inspire us? And how lucky we are to witness the work of artists that give them a platform to be admired.