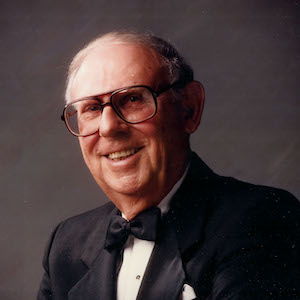 Born in Denver in 1917, and originally named Shapiro, Sherwood moved with his family to Los Angeles at age six. According to an unpublished memoir, he originally wanted to be an artist, but ended up working 17 years at a family jewelry store before hesitantly striking out on his own.

In 1954, he paid $10,000 for Daniel’s Jewelers, a jeweler in Bell Gardens, Calif., that had just gone bankrupt. Sherwood at first wanted to change the name, but ended up sticking with Daniel’s because he didn’t have money to replace the neon sign that hung outside the store.

Bell Gardens back then was a “totally nondescript town,” Sherwood wrote, that was a magnet for “Okies” and had a “Wild West flavor.” A bar across the street from his store was notorious for regular brawls.

One time, a customer got angry when Sherwood told him that he couldn’t keep fixing his broken watch.

“Believe me, every time I walked outside for a couple of weeks, I looked up and down very carefully to make sure he wasn’t there.… The ‘sheriff’ bought a watch that day and we repossessed it in jail a month later. He was no more a sheriff than I was. But he did save my life.”

Working with wife Helene, Sherwood made sure his store “did all we could to make working people feel special,” he said. One truck driver used to visit with his wife on Friday nights.

“They would schmooze with everybody,” Sherwood recalled. “One day, he came in and bought a man’s diamond watch for himself. Then he asked me, ‘Do you really think I need this?’ I replied, ‘Why did you buy it?’ He said, ‘I enjoy coming here and visiting here with you guys on Friday nights.’ ”

In 1958, Sherwood was one of the first retailers to join the Leading Jewelers Group, the buying organization that last year celebrated its 60th anniversary.

In the 1960s, Sherwood’s sons, Howard and Larry, joined the business, along with Howard’s wife, Stephanie. Granddaughter Laurie ran its training department in the late 1980s and 1990s. The store began expanding through Southern California.

Sherwood also became an active philanthropist, establishing a family foundation that has given more than $1 million to help children in need. In 1996, he launched the Anti-Defamation League’s Sherwood Prize, awarded to law enforcement officers who combat extremism and hate. In 1999, Sherwood won the Excellence in Service award from the Jewelers 24 Karat Club of Southern California, its highest honor.

By the 2000s, the chain had swelled to more than 70 stores. In 2001, grandson David joined its ranks and became its chief executive officer six years later. According to David, his grandfather still came into the office until 2014. That year, the chain was sold to Palladium Equity Partners.

“Even in his last days, his thoughts often migrated to all of the people he knew and loved at Daniel’s,” said David in a note to employees. “Daniel’s was like his third son, and he loved this business to its core.”

David said his grandfather “saw the world with constant curiosity, respect, and a desire to give back to the people he touched.”

Sherwood’s memoir concluded that his life has “been a remarkable blend of struggle and good fortune.

“There was certainly much that was painful,” he wrote. “But there was more than enough that was positive to compensate for this. I found much to enjoy during my childhood and youth. My mother and father’s nurturing attitude, and the religious faith and strong work ethic I learned from them, endowed me with the self-confidence and values I needed to succeed in life. I had the sense of accomplishment that comes from having built a business from scratch and having the means to give back to the community.”

He concluded that he had lived a “more than satisfying life.”

He is survived by his two sons, six grandchildren, and nine great-grandchildren. Helene, his wife of more than 60 years, predeceased him in 2000.

In lieu of flowers, the family requests donations be made in his memory to the Anti-Defamation League, Jewish Family Service of Los Angeles, or A Place Called Home.