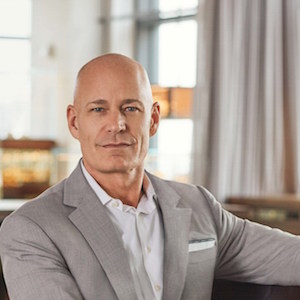 Robert Hanson (pictured), the retail veteran who has headed John Hardy since 2014, will step down later this year and be replaced by Kareem Gahed, currently the company’s chief revenue officer.

After he leaves the CEO post, Hanson will serve as nonexecutive chairman of the board of directors.

Audrey Finci, currently the company’s chief operating officer and chief financial officer, will also take on the role of president.

These changes will occur over the next three quarters, said a statement, and are part of a structured succession plan okayed by the company’s board.

Gahed will immediately assume oversight for merchandising and marketing, along with his current accountabilities for commercial operations. Hanson will continue to oversee product creative, operations, and finance through the transition period, after which Gahed will take full responsibility for everything.

Finci, the new president, joined John Hardy in 2014. She became its chief operating officer in 2011 and its chief financial officer this year. Prior to joining John Hardy, she worked at the Walt Disney Co. for 11 years and eventually became executive vice president of Disney’s consumer products division.

Hanson has been CEO of John Hardy since it was purchased five years ago by private equity firm Catterton Partners. Prior to that, he served as the CEO of American Eagle Outfitters and global president of Levi’s.