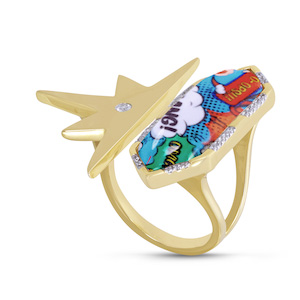 Sujan Doshi had spent time at a consulting firm and a hedge fund, often working with apparel companies like J.Crew. But coming from a diamond and jewelry background, he kept thinking about how the lessons he learned as a consultant could apply to the family business.

“What I learned in apparel is this whole idea of creating a really cool experience with the product,” Doshi says. “It really wasn’t just about creating a nice pair of jeans.

“You have a company like Bonobos, who would design a really cool hemline and build a story around it, and package it, and then all of a sudden, their sell-through would skyrocket. Or Burberry and their trench coats, they do the history of the material and where their material is from. Every company is doing something different to nail the experience. I thought that in jewelry, that experience was missing.

“I’ve grown up with jewelry. I’ve seen a lot of jewelry. I always felt, ‘What if there is a story behind this? Why isn’t there a story behind this?’…In order to be a player in jewelry in 2017, you have to do more than just product and price. Those are the two levers that a lot of jewelry companies focus on. I thought: Could there be a third variable beyond those two?”

Doshi did come up with a way to add a story to jewelry. The twist is that the stories that he settled on—rhyme.

“The more you can elaborate on the inspiration [for the jewelry], the better it is. I didn’t want to just write a paragraph about the inspiration behind each piece. I thought, why don’t I just give them the raw inspiration in poetry form?”

Doshi says he’s always been a writer, but mostly as a hobby. One of the things he’s dabbled in is verse.

“I write about things I’m inspired by. I thought if I put together poetry with jewelry, we could create something that is more meaningful.”

The result is LuvMyJewelry, a new, affordably priced brand—all price points are under $500—that aims to marry poetry and jewelry. Not only are the pieces inspired by Doshi’s verse, each line—with names like “Awakened Soul” and “Sunshine Twist”—includes a poem in the box.

The poem “is part of the sales pitch, that there’s a story with it, a poem written by the founder,” he says. “Sometimes the customers will ask the sales staff to read it aloud. Consumers want experiences. If they are going to buy it, they are going to want to hear [the poem].”

In a way, the concept is similar to Alex and Ani’s, which sells jewelry with commemorative cards.  “The jewelry is 80 percent of it,” one jeweler told me, “but the card is the 20 percent that binds it together.”

So far, LuvMyJewelry is sold mostly online and at a handful of boutiques. But Doshi, who recently became a board member of the Indian Diamond and Colorstone Association, says feedback has been good, and consumers—particularly younger ones—like the idea of getting something extra in their jewelry box.

“People say, ‘We really like the fact that there is a poem. We never really thought about poetry and jewelry before.’”