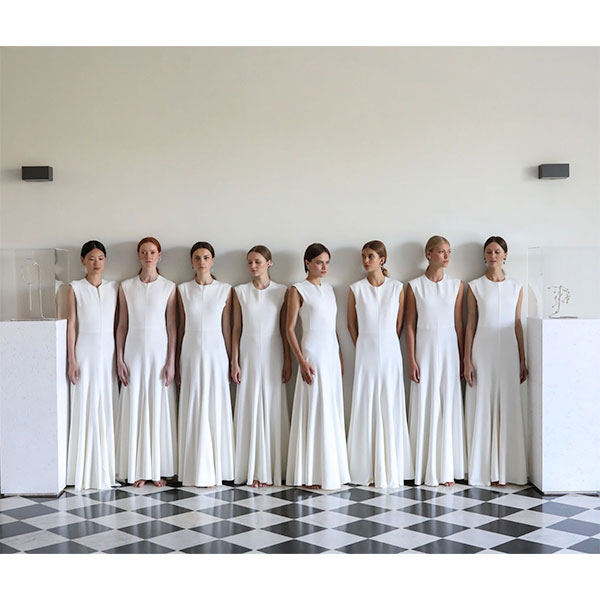 The Eiffel Tower isn’t the only glittering monument come the first week of July in Paris each year. In tandem with the Haute Couture, the jewelers of the Place Vendôme and the nearby Rue de la Paix show off enough magnificent jewels to give the twinkling tour Eiffel a run for its money.

Some brands choose to introduce their new collections in museums—appropriate, since much of the high jewelry on display are true works of art. This year, Dior—marking a 20-year partnership with Victoire de Castellane as its artistic director of fine jewelry—displayed at the Musée d’Art Moderne. To celebrate, the maison brought some of her greatest hits from past collections such as Versailles Secret Rooms and Jardins de Versailles, plus this year’s new collection, Dior Dior Dior, which captures the house signature haute couture lace along with ribbons, silk, and draping that typify the designs of the house. The designer used small pieces of cut fabric as a guide to creating the stunning diamond and colored-gem heavy collection.

Brazilian artist–turned–jeweler Ana Khouri, a relative Paris newcomer, was invited by chief curator Pamela Golbin to exhibit in a gallery at the Musée des Arts Décoratifs. Khouri called her presentation, Essence—shown on white-dress-clad models, next to sculptures she made herself—“very personal.” Highlights included a folded and crumpled gold cuff that resembled a sheet of paper and an earring featuring a paraiba that rotated 360 degrees, both of which related back to the sculptures.

Chanel Fine Jewelry showed at the Grand Palais, where the iconic French brand shows its ready-to-wear and haute couture collections. Mademoiselle Coco’s life continues to afford endless inspiration for the house’s jewelry. This time, designers looked to the impressive Coromandel screens in her Rue Cambon apartment. The elaborate screens—which traveled to all of the couturier’s homes in Paris and France—depict scenes of ships, palaces, flowers, and birds, providing motifs used in the jewelry.

Other jewelers took the opportunity to showcase the mood of their collection with a kick-off party. Atop the Centre Pompidou, overlooking the City of Lights, Chaumet staged a massive open-air fete that celebrated all things African for its latest collection, Tresors d’Afrique. Models displayed the exquisite jewels that took cues from colorful beaded tribal neckpieces and warrior shields that were made with precious stones.

Cartier hosted a festive a yacht party with made-to-order canapés, custom cocktails, and a traveling jazz band in front of the Eiffel Tower. It felt very French and on point as the collection, Coloratura, celebrates the concept of global culture in places such as Japan, China, Asia, and India. A sautoir-style necklace featuring a hollowed rubellite bottle pendant accented by chalcedony, chrysoprase, morganite, and mandarin garnets takes cues from illuminated lanterns used in Asian ceremonies, for example.

Elsewhere, the ateliers proved to be the perfect place for other high jewelers. Van Cleef & Arpels, which traditionally shows in its Rue de la Paix L’École headquarters, unveiled its latest collection atop the actual jeweler’s bench with trappings still in view—adding an air of authenticity to the charming and playful collections, this time based on four different Brothers Grimm fairy tales.

Valerie Messika of Messika took over the renovated 17th-century atelier formerly occupied by photographer Fred Meylan. There, she showed the dramatic necklaces splaying buckets of diamonds on antique dress forms. Louis Vuitton chose its own salon—though it was a rooftop turret room—to display the last in its Conquêtes series, Conquêtes Regalia, which combines both the flower and the V-monogram motifs in pieces adorned with the richest rubies, yellow diamonds, paraiba, and sapphires.

Perhaps Boucheron, which unveiled Nature Triomphante in a gallery in the Place Vendôme, gets the prize for originality in its presentation. Nine original rings—designs that merge technology and savoir faire—feature the petals of live flowers that are imposed and preserved onto an 18k gold base. The process was explained by two actors in lab coats playing part jeweler–part lab technicians who demonstrated, mainly by acting it out, how the flowers became a part of the rings. Even for those fluent in French, not all was divulged. After all, a trade secret is still a gem to behold in Paris.