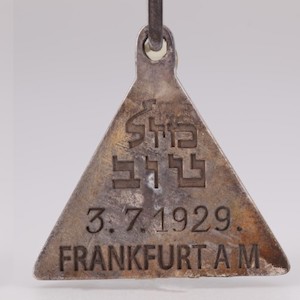 This is the story of how a piece of jewelry introduced a man to a first cousin he never knew—or knew of.

In January 2017, Barry Eisemann, a retired engineer who worked for most of his career in the federal government, was going to a movie when he received a call from a number he didn’t know. He ignored it. The person called back; he ignored it again. Then he got a call from his daughter Mandy.

“She sounded desperate,” he says. “She said, ‘Call me right away. It’s about your family.’ ”

When he called back, he heard something incredible.

Since 2007, Yoram Haimi, an archeologist with Tel Aviv University, has been excavating the site of Sobibor, a Nazi extermination camp in eastern Poland. Haimi has a personal reason for these digs: Two of his uncles were killed in the camp, which the Nazis paved over to hid what happened there.

“When I first came there, it was all forest,” he says.

But, along with a local partner, he received a license to dig. His 10 years of searching have uncovered a number of historically significant finds, including the camp’s original gas chambers, crematoriums, barracks, and mass graves. He also found artifacts belonging to inmates, including a few pieces of jewelry.

In 2016, his team uncovered a triangular pendant, about the size of a quarter. It was made of silver but had long since tarnished. The front (pictured at top) was inscribed with the date “July 3, 1929” the words “Frankfurt AM,” as well as the words “Mazel tov” written in Hebrew. On the reverse (pictured below) was the Hebrew letter hei, representing the name of God, as well three Stars of David.

“We didn’t know what it was,” says Haimi. But it was clearly significant.

“Every piece that you find adds to the story of the Holocaust,” he says.

Further research found that it was a brief custom in Frankfurt, Germany, for Jewish children to receive pendants after they were born. Famed diarist Anne Frank, who was born in Frankfurt before moving to Amsterdam, is said to have had a similar pendant, which is reportedly stored in a safe by one of her relatives.

To track down the owner, researchers had to scour the town’s birth records. There was one Jewish girl born in Frankfurt on July 3, 1929: Karolina Cohn.

“That was very lucky,” says Haimi. “Because if there were three girls born that day, it could have been any one of them.”

According to records, in 1941, the Cohn family was deported from Frankfurt to the Minsk Ghetto in Belarus. In 1943, the ghetto’s 2,000 surviving residents were sent to Sobibor.

It’s still not known if Karolina Cohn, who would have been 14 in 1943, was among them. Historians believe that when most of the inmates arrived at the camp, they were separated by sex. Guards then shorn their hair, stripped off their clothes, and led them to the gas chambers. It’s possible that Cohn had the pendant with her and dropped it through a crack in the barrack’s floorboards. It’s also possible the poor Cohn family may have sold the pendant while at Minsk, perhaps for food. Another scenario: Karolina may have died by the time her family was sent to the camp, but her mom or sister kept the pendant as a memento.

“There are a lot of open questions,” Haimi says.

The find remains unusual in that the Nazis typically stole items—particularly valuable ones—from their captives. “Out of 250,000 Jews killed at Sobibor, we have found maybe 100 items of jewelry,” says Haimi. “Not that many. A lot of it’s broken. Some of it was hidden under the floor, so the Germans wouldn’t see it.”

On top of that, in the years since the camp was closed, some locals looted what was left, he says.

Following the discovery, Chaim Motzen, a Jerusalem-based amateur genealogist, was able to track down 300 members of Cohn’s family, mostly descendants of cousins who escaped during the war. That included Eisemann, the first cousin who had never even heard of her.

“I didn’t know much about my father’s family,” Eisemann says. “He was the only one who left Germany prior to the war. His brothers and his sisters stayed, and they were all murdered. My father never spoke about them. That was the mentality back then. Maybe it was just too painful to talk about.”

In November 2017, more than 100 of Cohn’s relatives gathered in Germany to dedicate a plaque in honor of her and her family at the home where they lived. Most of the family did not know each other before they learned about the pendant. Some didn’t even know they were related to Holocaust victims.

Discovery of the pendant generated worldwide attention because of the possible connection to Anne Frank. Cohn was three weeks younger than Frank, lived in the same town, and they both had similar pendants. It was possible that they knew each other.

Last year, Klaus Hillenbrand, an author who frequently writes about the Nazi persecution of the Jews, released The Amulet and the Girl, a German-language biography on Cohn. He discovered that her family was poor, received help from local social services, and tried to emigrate to the United States but was blocked by U.S. restrictions on Jewish immigrants.

“It’s highly unlikely that Karolina had any connections to Anne Frank,” Hillenbrand tells JCK. “It seemed that these pendants were given to all newborn Jewish girls in Frankfurt born in 1928 and 1929 either by the Jewish community or by a rabbi. [We have] identified around eight elderly Jewish women in Israel and the U.S. who still have this pendant.”

The original Cohn pendant is still in Poland, on display at the State Museum at Majdanek in Lublin. It will likely be moved to a planned visitor’s center, which will be opened on the original Sobibor site. Haimi believes having a visitor’s center on the camp’s location is a mistake, as he wants to do further excavation on the area. Since 2017, the country’s right-wing nationalist government has halted his efforts.

Still, the small pendant, and the mystery surrounding it, stands as a powerful symbol of all that was lost.

In 2017, Eisemann told The Times of Israel that he had one wish: to hold it

“I think if I held it in my hand,” he said, “I would feel a spiritual connection to Karolina.”

He hasn’t been able to do that. But soon after, he reached out to an old friend, Sam Sandberg, chairman of jewelry manufacturer A. Jaffe, to make a copy of the pendant for him and his daughter. Sandberg says fashioning the replica was an “honor.” He hopes to make them for Cohn’s other surviving relatives.

Now that she has the re-created piece, Mandy Eisemann says she plans to wear it every day.

“I want to be asked about it,” she says. “So I can talk about this story and about this little girl, and how unfortunate it was that she wasn’t able to live a full life. She didn’t write a diary, but I do believe that she shouldn’t be forgotten. And she did leave us this pendant, which is a beautiful object because it’s so unique. It’s not glamorous, it’s not studded with diamonds or anything. But because of its story, it’s beautiful.”

(Images courtesy of A. Jaffe)