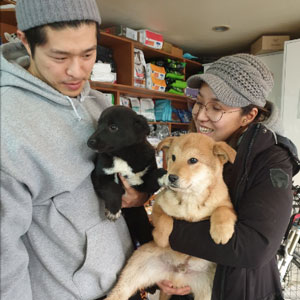 Ashley Davis, senior editor of fashion at National Jeweler, is wild about jewelry. But she loves dogs just as fervently. And her two passions dovetailed dramatically in late January when Davis became the U.S. point person for the daring rescue effort of 53 dogs from an unsanitary, backwater dog-meat farm in South Korea.

The operation to remove the dogs from the farm in Anseong, South Korea (located about 50 miles south of Seoul), and ultimately ship them to homes and breed rescue organizations around the United States, has been herculean for Davis and her South Korea–based contacts. But the jewelry industry has rallied around the cause. Big and small brands have been promoting the fundraising efforts on Instagram, donating directly to Davis, and hosting online auctions to aid the effort.

Davis was first made aware of the dire situation through Instagram, where on-the-ground activists Annie Ham and Ivy Yoon were posting photos and videos of the dogs (one disturbing video shows a puppy eating the severed foot of another dog) that were uncharacteristically friendly and adoption-ready for canines found on meat farms.

Davis and her husband rescued their own dog, Sandwich, from a South Korean dog slaughterhouse, so were educated in the process and aware of the inhumane treatment of dogs on some meat farms, which are legal in Korea.

After being in contact with Yoon and Ham about the situation, Davis set up a GoFundMe page to raise money for the rescue and rehousing, then promoted it like crazy on her well-read Instagram feed. “This is the only way I know to get the word out to people,” Davis tells JCK. “And we’ve had an incredible response.”

At press time, the team has raised $22,896 of the $50,000 it will take to vaccinate, medically treat, and ship the dogs. Jewelry brands including Jane Taylor, Marla Aaron, Melissa Kaye, Larkspur & Hawk, and Michelle Fantaci have been some of the biggest donors so far.

A slew of other jewelry companies have hosted Instagram auctions of items to benefit the fund. Designer Stephanie Gottlieb donated the proceeds from a pair of diamond bracelets, and indie jewelry brand Pinky Swear raised $1,495 by donating 100% of proceeds from the sale of select jewels. Instagram influencers have also helped spread the word, notably Arielle Charnas of @somethingnavy, who has a 272,000-strong following.

As the fundraising took off, the activists in South Korea dug into the hard and dangerous work of removing the dogs from the farm, which Davis chronicled in unflinching detail on her Instagram.

Video footage of the activists getting into a physical altercation with the farmer, who was hiding dogs and claiming some were pets (though they lived in the cage paddock), went live on her Stories this week. As did heartbreaking photos of a mother dog and her puppy scheduled be euthanized because the money wasn’t there to save them (someone stepped up at the last minute, and Davis chronicled that, too).

As of yesterday, all dogs healthy enough to be removed from the farm were; some very sick ones were euthanized. And currently, the South Korean activists are driving dogs around the region—for up to 12 hours a day—trying desperately to find temporary homes and spaces for them.

There’s stigma attached to adopting meat farm dogs in South Korea, so it’s nearly impossible to place them there. But rehousing the pack in the United States will be expensive. “Annie and Ivy told me this is the hardest part,” Davis says. “Once you get them out, you need places to put them, and it’s really, really hard.”

One hurdle: Yoon and Ham, at Davis’ urging, saved a few beautiful and healthy grown mastiffs, which—because they have to fly cargo—cost $5,000 each to ship the United States. Most of the other dogs can fly for around $200, but many require pricey, ongoing medical treatment, among those a pack of puppies with distemper.

Davis says she’s relieved most of the dogs made it off the farm and are out of imminent danger. She adds that she’s now laser-focused on fundraising.

“What I try emphasize to people is that every single dollar counts, whether it’s a $5 donation or sharing the GoFundMe with three of your animal-loving friends,” she says. “This has been a grassroots effort. It’s been really incredible what people have done, and I have no way to thank people properly. All I can say is that when the pictures come in of these dogs coming into the U.S. and going into peoples’ home, it will all be worth it.”

To donate to the effort to help the rescued dogs of the Anseong dog meat farm, head to the GoFundMe page.