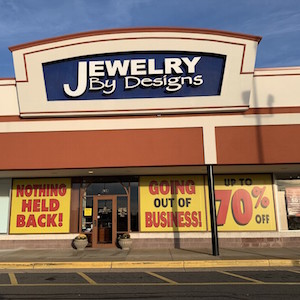 Woodbridge, Va.–based Jewelry By Designs is shutting its doors—at least for now—though co-owner Jenny Caro tells JCK she is “90% sure” it will reopen next year under new ownership.

Even so, many were surprised at the closing of such a well-regarded store. Over the years, Caro has made a name for herself, not just locally but in the industry. She is a board member of Jewelers of America and, since 2015, has chaired its political action committee, JAPAC. In 2014, she organized a two-day digital marketing event with the Leading Jewelers Guild, and in 2011, she attended the record-setting Elizabeth Taylor jewelry auction at Christie’s, where she spent $5,000 on a piece of “paper jewelry” (which was actually a paper cutout given to Taylor by Malcolm Forbes).

But Caro says the decision to call it quits has been a year in the making.

“[Co-owner and husband] John and I don’t have it in us anymore,” she says. “I have reinvented this business about four or five times over the 30 years. Our best year we did $6.5 million when gold buying was crazy, and we are running now about $3 million. It’s just a struggle. I don’t want to fight the good fight anymore. I want to do what I want to do.”

Without having to plan or buy for Christmas, her “year has been a little boring,” she admits.

But closing the store has, in a way, made her a more disciplined retailer.

“The funny thing is, this past year, I ran my store like I should have been running it. I had too much inventory, too much staff. But I always wanted the customer to have a great experience. I put the customer first before my net profit.

“Many of us need to override our emotional drivers to be successful. I have been successful, but I may have been more so if I acted more like a banker or a consultant.”

Now that Caro will have a lot more time on her hands, she hopes to do consulting for other jewelers and help market her husband’s inventory management software program, Client Retail.

She does have a “solid offer” to take over the store, which she can’t talk about at the moment but is extremely hopeful will go through.

“I feel settled and good that I’m turning the store over to management who will reinvigorate it,” she says.

In the meantime, the store is running a closing sale, and Caro has been touched by all the customers who tell her they’ll miss it.

“The most difficult thing is that some people are in tears,” she says.

She points to the local newspaper’s Facebook posting about the store closing, which was full of anguished reactions from former customers.

“Bittersweet to see this local business close,” said one. “I bought the very first piece of beautiful jewelry for my late wife here. Something I still hold onto today. Thank you for being a part of the community for so many years.”

(Images courtesy of Jewelry By Designs)