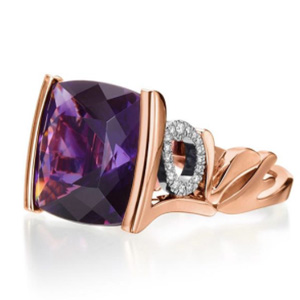 We reported last week that jewelry e-commerce site Auverture was hosting a raffle to benefit victims of the horrific Beirut explosion that occurred Aug. 4.

That raffle has been extended through Tuesday night. And we’ve since learned of other jewelry firms raising funds to aid victims of the blast, which killed more than 200 and injured thousands more.

Yesterday, Mark Patterson Jewelry announced that it had raised $5,000 to benefit the Lebanese Red Cross by raffling off a stunning amethyst and rose gold cocktail ring (pictured) yesterday.

Mark Patterson’s wife and partner, Josette, tells JCK, “My mother is Lebanese and I have a lot of family and friends there. My aunt had received the Florence Nightingale medal for her work and dedication to the Red Cross in Lebanon during the civil war, so it’s a charity that is close to my heart. They have done so much to help the injured, the old, and the wounded.”

New York City-based fine jewelry brand Gabriel & Co., which has deep roots in Lebanon, is also pitching in. The brand has debuted a GoFundMe page to fundraise for SpreadLife.org, a Lebanese grassroots Christian organization that helps people with medical and nutrition needs. The charity is currently providing on-site medical care and feeding the newly homeless population in Beirut.

The Gabriel Love Foundation Beirut Disaster Relief fundraiser was initiated by Jack and Dominick Gabriel, co-owners of Gabriel & Co., who grew up in Lebanon and are “still deeply connected to their heritage and the people of Beirut,” according to a statement from the company.

Keeping Beirut in our thoughts. All profits from our new Berbere Chromatic ring will be donated to the Lebanese Red Cross. For further information, please contact: sales@repossi.com. #SupportLRC

And Piece of You, a jewelry brand that focuses on personalized designs, announced Aug. 6 that it will be donating an unspecified percentage of sales from its map-themed jewelry this month to nonprofits aiding victims of the explosion.

If you know of other jewelry brands fundraising for Beirut, please send that information to me at evesilind@gmail.com for inclusion in this story.