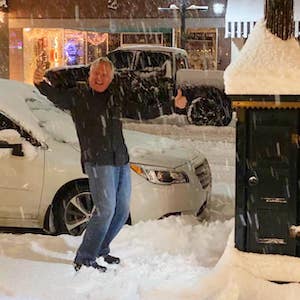 The night of Jan. 11 was a thrilling one for Clark’s Diamond Jewelers of Coeur d’Alene, Idaho.

The store had run a holiday promotion promising that if it snowed more than three inches on that day, it would refund all customer purchases made between Nov. 22 and Dec. 31. The promotion was underwritten by Beazley Insurance Co., through broker Spectrum Weather Insurance.

The store picked Jan. 11 because Cliff Harris, a local climatologist, predicted it would snow between Jan. 10 and Jan. 13. The store went for the 11th, right in the middle.

It worked out. On Jan. 10, a storm hit Coeur d’Alene. The snow continued through Jan. 11. Then it stopped for a bit, started snowing again and continued all through the night.

“We were having a party watching the snow fall,” says store owner Jane Clark.

Harris measured the snowfall as 3.6 inches. Everyone was thrilled.

Until the next week, when things turned icy.

“Immediately, I thought there was something wrong,” she says.

Clark asked the measurement service to look at it again. Later that week, it revised its measurement to 2.3 inches—still below the threshold.

The store opened a claim with the insurer. Last week, it issued another denial.

Clark responded by sending information about snow that day, including notes, screenshots, and pictures. Nearby stores shared surveillance footage that showed just how much snow had accumulated.

“The community rallied around us,” she says. “We were able to get local businesses to clearly show that it was snowing in the hours when they said it wasn’t.”

Clark hired a lawyer and sent a demand for payment. Harris said he planned to sue for defamation.

But now everyone can put their attorneys away. Last weekend, Weather Command said it was amending its report, to 3.6 inches.

“Since Mr. Harris’ data was not available to us through the normal [National Weather Service] data archives that we use, and we only received his documentation over the past three weeks, we have to evaluate very carefully that information before changing our report,” said Weather Command meteorologist Thomas R. Piazza. “I have concluded that his measurements follow NWS guidelines, his documentation is more than adequate, and his professional reputation is impeccable.”

As a result, around 400 Clark’s customers will get their holiday purchases refunded. The total amount will come to more than $500,000.

The worst part, she says, was some of the news coverage drew online commenters who didn’t read the articles and assumed the store was pulling a fast one.

Looking back, Clark isn’t bitter and thought in the end, her broker, Spectrum, was helpful.

“Spectrum worked really hard to help me. They listened to me cry. They helped me submit things. Having them made a difference.”

She also learned that determining the amount of a snowfall wasn’t as straightforward as one might think.

“I’m a gemologist. I’m not a weather person. In our area, we are kind of rural. There is nobody physically measuring the snow other than these small cooperative weather stations. A lot of guesswork is involved in snow measurement. I didn’t know any of this stuff.”

This isn’t the first time an insurer and jeweler have disagreed over a snow promotion payout. Ironically, when Clark’s father, Dan, ran this promotion in 2005, he had a similar dispute with a different insurance company. It took months to receive $250,000 in refunds.

“We didn’t do the promotion again for 10 years,” says Jane Clark.

Despite having had the promotion end in two disputes, Clark isn’t against giving it another shot, especially since it ultimately had a happy ending for her and her customers.

“I’m not sure I could get insurance at this point,” she says. “But if they did insure me, I might do it again. It’s a great promotion. It’s always been fun. Up here, we get a lot of snow. You never really know. It can dump unexpectedly over a weekend. I’ve enjoyed it and I’ve always have had fun with it. I would love do it again.”

The store is planning a party on Feb. 21, when people can pick up their checks. It’s also calling customers to make sure they know the good news.

“We’re also asking if they want anything for Valentine’s Day,” she says.