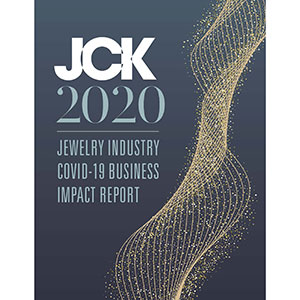 JCK’s Jewelry Industry Confidence Index (JICI), which stood at 86 last year, fell to 66 this year. While that’s a significant drop, it still means that two-thirds of jewelers are optimistic about the future.

The survey was part of an in-depth study on industry trends conducted for JCK in June by national research firm MRI-Simmons.

John Carter, president of Jack Lewis Jewelers in Bloomington, Ill., said during the webinar that he’s used the time his store was closed to redo his website—and surprisingly, he pared it down.

“Rather than have a website that was hosted by somebody who had a bunch of inventory that wasn’t necessarily things the customer could walk in the door and see, we now have a proper representation of things we actually have,” he said. “I think it tells our story a little better.”

He is also trying to better tell his story with social media. He says, “We were discussing how everyone was feeling so bad. People were unsure. People are worried about being unemployed, our people are unsure. We just did a series of videos where we said, what we do matters. We always say, at Jack Lewis, we sell more than just shiny metals and sparkly rocks. We sell things that express your deepest emotions for the people you love the most.

“I made a video where I talked about this little bracelet from John Varvatos that my children gave me for Father’s Day and how I wear that every day. I travel a lot and I don’t get to see my kids as much as I want, but when I look down, I know why I work so hard.… It was really powerful and emotional and reminded us all of what we do and the why we’re rooted in this industry.”

Megan Flynn, co-owner of M. Flynn Jewelry in Boston, said that while her online business has become “healthier,” she doesn’t expect the business to move completely online.

“We’re seeing customers still want to come into our store,” she said. “I truly believe that a store is where those connections are made, and it’s really important to us that customers come for the whole experience. People are coming in by appointment, and we are booked solid. But once somebody becomes comfortable with us, they might be more comfortable buying online. That’s usually what we see.”

Carter said he has decided not to stress online sales— and, in fact, thinks he’ll sell a little less that way this year.

“We really are an industry that has been somewhat insulated from the internet,” he said. “The reason is, people want to come in and they want that relationship with their local jeweler. We are real people in your community. We support your soccer teams. We want them to come in and meet their friends at the jewelry store.

“If buying a diamond truly was just about reading the AGS or GIA grading report, why would they need me?” he continued. “It’s more than that. It’s me interpreting those results for them and showing them why this diamond is more spectacular than the other one and why this is a better value for them.”

Flynn said she’s asking designers to send her fresh product to get some excitement for holiday. “I’m asking them to throw a box together. But there’s really nothing that replaces going to shows for us. It’s still really important for us to see things in person, just like it is for our customers.”

Carter also felt the loss of trade shows this year. “It’s hanging out at the bar at the Palazzo after the show and talking about what we saw. That, for me, is the fuel that keeps me connected to this industry. It’s personally fulfilling and then you also walk away with a lot of professional ideas. That is what I miss the most.”

Carter said the big trend he’s found during COVID is “not trendy,” but pieces with a deeper meaning, such as charms, heirlooms, and—another surprise—engagement rings.

All of which shows that, even during these dark times, “there are still things to celebrate,” she said.

JCK’s full “State of the Jewelry Industry Report 2020” can be ordered here.