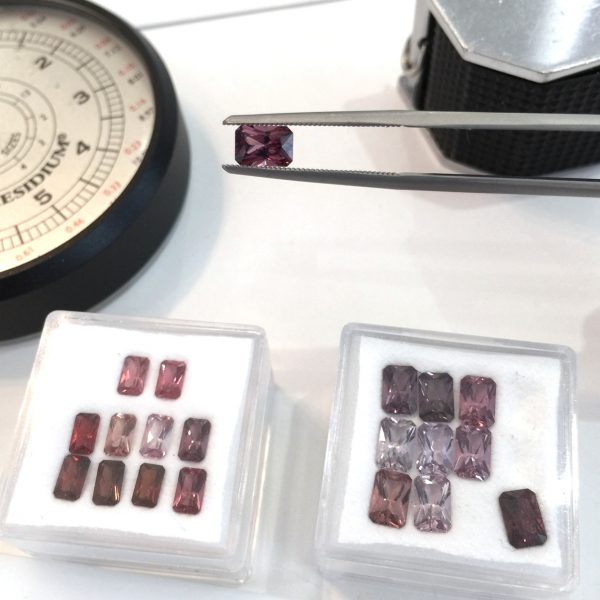 If you’ve ever browsed the booths of the AGTA Pavilion then you already know: It’s the mother of all treasure hunts. Especially for an emerging designer like Gina Ferranti, of GiGi Ferranti, who shopped the GemFair at this year’s JCK Las Vegas with an eye for colored stones to complement her trademark geometric designs. In fact, she was specifically in the market for spinels: “They’re not as well known as other gemstones and I wanted to spice things up,” says Ferranti.

And while the NYC-based designer had never done business with Mayer & Watt before—“I just stumbled on their corner booth while browsing the aisles,” says Ferranti—the Maysville, Kentucky, gem supplier had exactly what she was looking for. “They carry a variety of gemstones, including Malaya garnets and tourmalines, and spinels are definitely one of their favorites.” 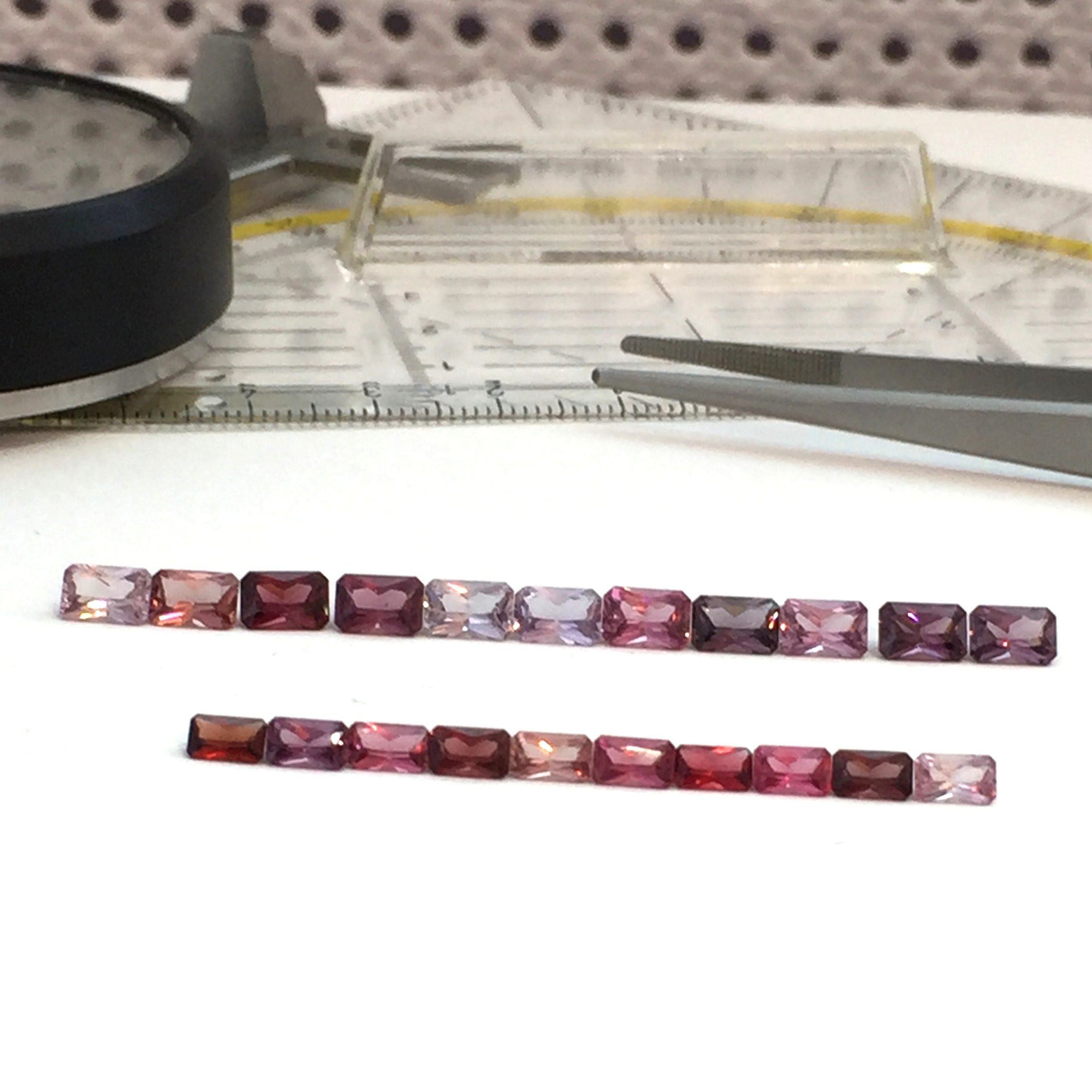 Mayer & Watt’s selection of spinels included parcels of rectangular radiant cuts from Vietnam encompassing an ombré palette of lilac-mauve to a deeper, reddish purple. The stones, pictured above, had an enchanting effect on Ferranti, so much so that she purchased 10.38 carats’ worth. “The colors spoke to me, but these spinels also have a velvety, sultry feel when I look at them, giving them a richness all their own,” she says. In fact, Ferranti was so delighted with her hoard (pictured above) that she shared the news on Instagram, calling it a “spinelibration.”

The designer attracted attention earlier this year with her Regalo collection, a modern, feminine offering punctuated with vibrant pink sapphires and pink tourmalines. “But the pink spinels that I picked up in Las Vegas are more subdued, and I love the color variations,” says Ferranti. “When I see a larger single stone, the design I want to create comes to me right away, but with multiple, smaller stones I usually have to play with them for a while to figure it out. I place them on a white piece of paper and draw around them, making different versions until I see something I like.”

And Ferranti has done just that—as the sketch below highlights, the spinels will ultimately appear in a pair of one-of-a-kind earrings set in rose gold with diamond accents. 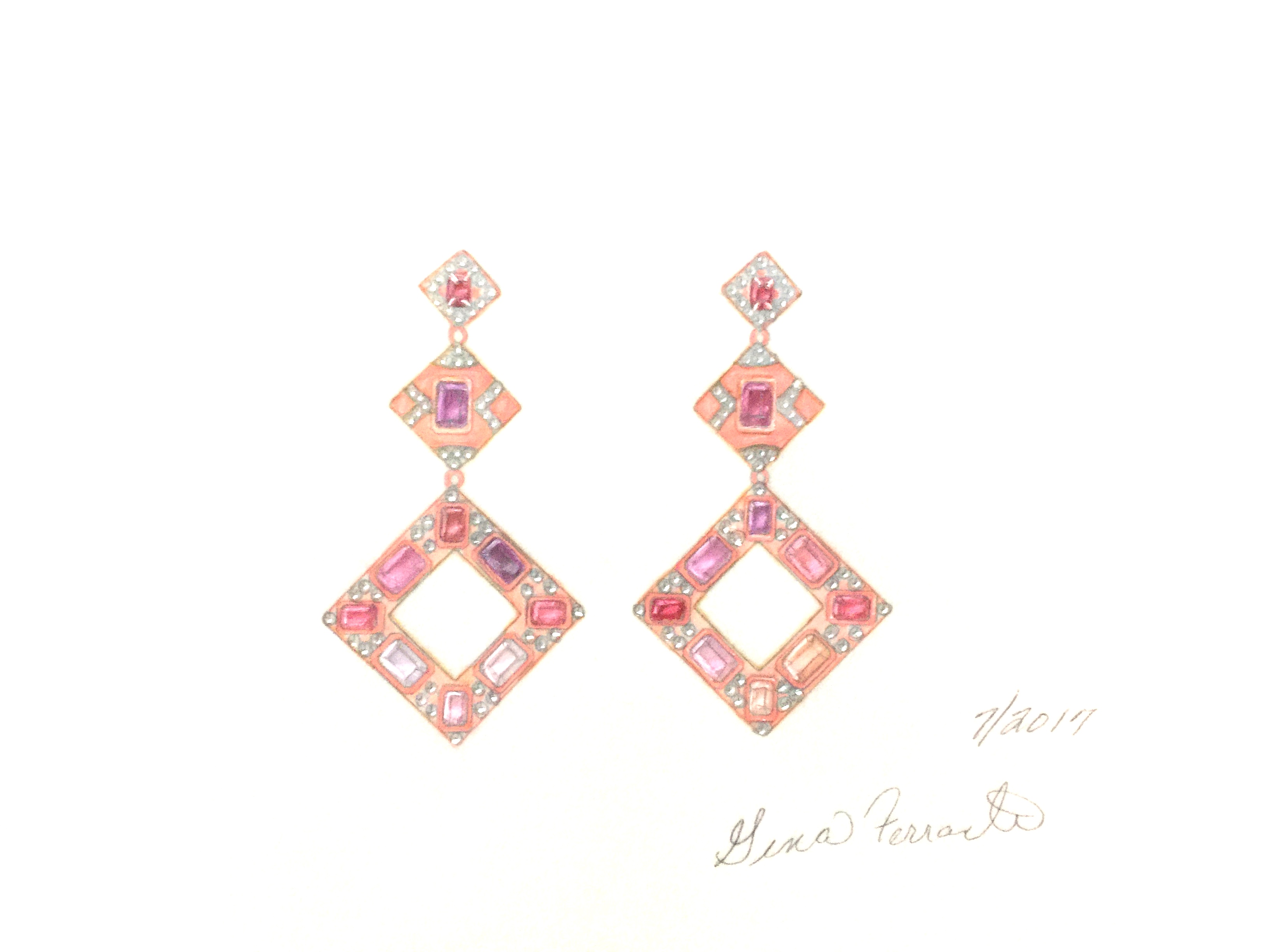 A sketch by Gina Ferranti for one-of-a-kind earrings

“It was pretty challenging because all of the stones are different colors, but I found a combination I am very happy with,” says Ferranti, who expects to have the piece finished in time for the holidays.