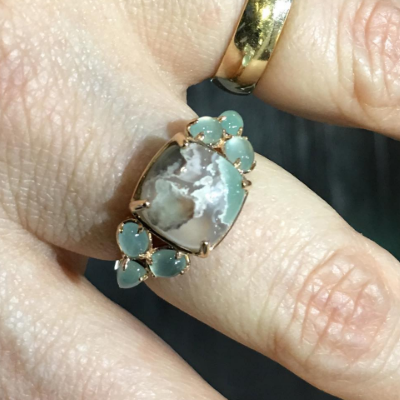 But there’s one gem that brand sales manager Ilanit Zadok says is literally flying out of the two-story booth: aquaprase, the transparent, minty-green chalcedony that was discovered by veteran gem explorer Yianni Melas in Africa in 2014. (Read JCK news director Rob Bates’ excellent backgrounder on how the stone was discovered here.)

Le Vian has set the stone—which GIA called “bluish-green chalcedony” and characterized as “a new and welcome addition to the gem trade”—in delicate, vintage-feeling 14k yellow designs including an elegant ring featuring a sugarloaf-cut aquaprase center stone and a ladylike pendant with stacked cabochon-cut aquaprase.

“I had all these trays of them,” reported Zadok, “and I’m down to almost nothing. It’s pretty incredible how fast they’re going…people are really loving them.”

It’s little wonder why. Most brands, including Le Vian, are using aquaprase mixed with matrix, which positions the gem in the super-trendy category of earthy, matrix-filled gems that includes paraiba and turquoise.