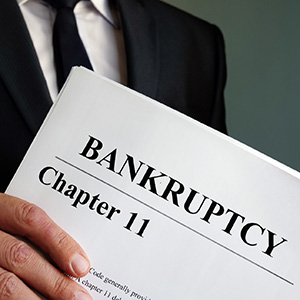 Both J.C. Penney and Neiman Marcus are considering bankruptcy filings, as the already-ailing department stores have had to close stores due to the coronavirus, reports said.

Both companies have already furloughed thousands of store workers after closing their U.S. stores because of the COVID-19 pandemic.

Reuters, quoting unnamed sources, reported that while J.C. Penney has enough cash to survive all its stores being closed, “the company is contemplating a bankruptcy filing as one way to rework its unsustainable finances and save money on looming debt payments, which include significant annual interest expenses.”

The sources told the news service that a filing was not set in stone. J.C. Penney may appeal to its creditors to restructure its debt out of court or seek alternate sources of financing, it said.

The story was later confirmed by USA Today, which wrote that the department store is “exploring [bankruptcy] along with a range of other options, including an out-of-court debt restructuring.”

“Although J.C Penney liquidity is adequate, the widespread store closures as a result of the coronavirus pandemic and the continued suppression of consumer demand is expected to pressure J.C. Penney’s EBITDA, impede its turnaround strategy, and weaken its leverage to unsustainably high levels,” said Moody’s vice president Christina Boni in a statement.

Neiman Marcus is already in advanced talks about a bankruptcy filing, Reuters reported on April 2.

“The Dallas-based retailer is several weeks away from a potential bankruptcy, and it is still possible that it manages to escape it,” sources told the news service. “Creditors could give Neiman additional time to make upcoming debt payments due this month while restructuring discussions continue, which could result in a transaction that reworks financial obligations outside of bankruptcy proceedings.”

On Wednesday, WWD wrote that Neiman Marcus has more than $100 million in interest payments due this month and said that it’s already notified lenders that it won’t be able to pay.

“I know Neiman’s is actively working on a debtor-in-possession loan for a bankruptcy soon,” a source told the newspaper.

The retailer was purchased in 2013 by Ares Management and the Canada Pension Plan Investment Board.

The owners expect the retailer to stay in business, WWD said.

On Monday, S&P Global downgraded Neiman Marcus bonds to CCC-, citing “headwinds from the coronavirus and [an] unsustainable capital structure.

“The negative outlook on Neiman Marcus reflects the elevated risk that the company will file for bankruptcy or undertake a restructuring, likely in the next six months,” the credit-rating agency wrote. “In light of the significant headwinds stemming from the coronavirus pandemic and our expectation for a U.S. recession this year, we believe the company’s prospects for a turnaround are increasingly low.”

Neiman Marcus declined comment. J.C. Penney did not respond to a request for comment by publication time.