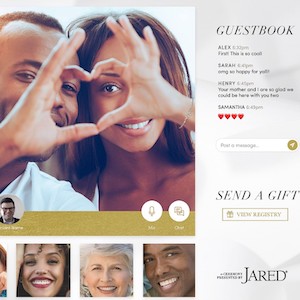 Have you ever been to a virtual wedding? I haven’t, either.

But apparently the first one took place almost 25 years ago. For a while they were being offered by—oddly enough—Ikea. Yet, it’s safe to say they never really took off.

That was before COVID-19. Most jurisdictions have banned large gatherings, including  weddings. A lot of engaged couples have decided to postpone their big day. But others that have decided they still want to tie the knot—even if the guests can only attend by computer.

So along with virtual funerals, bar mitzvahs, and communions, there’s been a surge in virtual nuptials.

Zoom weddings are now legal in many states. Bridal magazines are all over it. “A virtual wedding, even if it’s a temporary placeholder for the real thing, is a wonderful alternative to postponing or canceling,” said a feature in Brides.

All of which seemed like an opportunity for Jared.

“About 80,000 marriages are scheduled to take place,” Brace says. “A lot of couples wanted to move forward with their weddings. We thought, What we can do to help?”

What it did was create a virtual wedding platform, which can be seen here. It lets the couple invite guests, set a date, and then hold the ceremony online, with a spot for the couple, the wedding party, and an officiant. (This could be a Jared employee, since a number have gotten their officiant license.) There’s also a guest book and a way to send gifts. The platform can be customized with different backgrounds and music. And it’s all recorded.

It’s a lot more elegant than Zoom—plus it won’t kick you off after 40 minutes. And while It may not be everyone’s dream ceremony, we’re living through times that few have ever dreamed possible.

“This has been heartbreaking for a lot of couples,” Brace says. “They have planned their wedding. It’s a dream day for a lot of these couples, and they are not able to do it in the way that they want. But some are willing to say, ‘Okay. We still want to move forward.’ ”

He adds: “We did this really quickly. It has really come to life in the last few weeks. I’m super proud of the Jared marketing team. They have demonstrated a lot of agility and drive, working on this nights and weekends.”

Jared has released a commercial touting the platform, built around the we-hope-this-becomes-a-hashtag slogan: “Love Can’t Wait.”

“It’s not about the dress, the venue, the cake, or even the first dance,” the ad says. “It’s about love. And love can’t wait.”

The couples in the ad have all held virtual ceremonies on other platforms, Brace says.

“You see the joy in these couples’ faces and you see them just kind of rolling with the punches in a way that is really remarkable and inspirational to see.”

Often, the couples dress up in full wedding finery, such as a traditional gown and a tux. But not always.

“The vast majority tend to do it in a traditional way. But this is a moment when a lot of the norms are being broken, so a lot of couples are doing it nontraditionally.”

Jared is offering the platform for free—no purchased required. Brace says it’s too early to tell if it will drive sales.

“Our main purpose is really about helping these couples. That’s what this program is about. I do believe that connecting with customers, and developing relationships with them, will ultimately translate into business. But right now, it’s just about helping the couples.”

By Sunday, the platform will have hosted 15 weddings. Another 600 couples have set a date to get married on the platform—which, considering the program is a little more than a week old, has exceeded Brace’s expectations.

“We’ve had thousands of people take the first step of entering their email. But to actually go to the step of setting a wedding date really signals an intention that they are ready to move forward. We anticipate more and more weddings as awareness grows around this.”

Which raises the question: Now that Zoom and videoconferencing have become a regular part of our lives, will virtual weddings—and the Jared platform—outlast the current crisis?

“I think that, when we come out of this, people are going to be hungering to get back to normal,” Brace says. “At the same time, I also think there’s some things that they’ve learned and that this situation has done to change them.

“I certainly hope things get back to normal and people can celebrate their weddings in person. But there’s always the situation where people can’t attend weddings, and my hope would be that what we’re doing here will help to enable more people to participate in weddings moving forward and make them even more special occasions than they’ve been in past.”