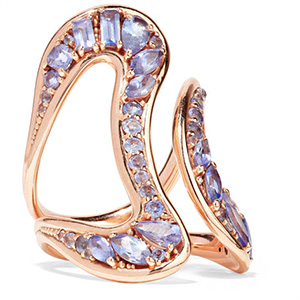 Jewelers of America (JA) has announced its nominees for the 2019 GEM Awards, in the categories of jewelry design, media excellence, and retail excellence.

The trade association will announce the winners during the 17th Annual GEM Awards on Jan. 11, 2019, at Cipriani 42nd Street in New York City.

Here are the designers, retailers, and media members being recognized:

Silvia Furmanovich: The  jewelry designer was born in Brazil into a family of Italian goldsmiths that created sacred adornments for the Vatican. She debuted her namesake collection, inspired by international design and motifs, in 1998 and opened her first stand-alone boutique in 2009.

Fernando Jorge: Jorge, another Brazilian-born jewelry designer (though he’s currently based in the U.K.) pairs Brazil-sourced gemstones and minerals with sinewy gold designs inflected with 1970s-era glamour. Jorge studied jewelry at Central Saint Martins in London and launched his eponymous collection in 2010.

Valérie Messika: Messika is the daughter of a diamantaire and worked at Chanel before founding her fashion-forward fine jewelry brand, Messika, in 2005. In 2013, she opened Messika’s flagship store in Paris and two years later her Parisian high jewelry atelier.

Brecken Branstrator: Branstrator is the senior editor at National Jeweler and a graduate of the University of North Carolina School of Media and Journalism. She began her career as a reporter and editor at a trade publication for the alcohol industry before joining National Jeweler in 2013, where she covers the colored gemstone market, often traveling internationally for her beat.

Will Kahn: Kahn, Town & Country’s market & accessories director, edits the magazine’s shopping pages, styles jewelry stories, and dresses the occasional celebrity. His #willsnotebook posts on Instagram are widely read and followed. Before coming to the magazine, Kahn spent seven years in the accessories and fashion department of W magazine and held positions at New York magazine and Teen Vogue.

Michael Thompson: Thompson, a former senior editor for JCK, has written on the business of watches as editor-in-chief of International Watch since 2005. He’s also done stints as an editor at Security World, a trade publication that took him behind the scenes of NASA and Rockefeller Center, among other assignments. He earned a bachelor’s degree from Hiram College and a master’s degree in journalism from Northwestern University.

The 2019 GEM Awards will also honor Stewart Wicht, the CEO and president of Rolex Watch U.S.A. who announced his retirement this year, with the prestigious GEM Award for Lifetime Achievement.