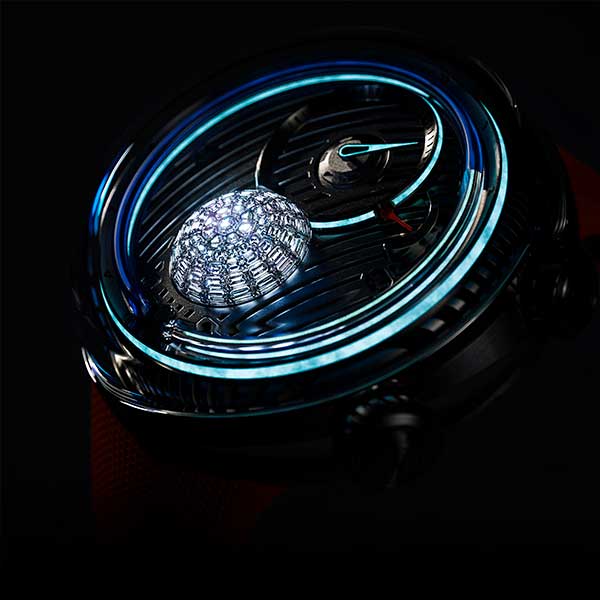 Diamond setting is a delicate, tricky process, and never more so than when the mount is designed to be invisible. Regarded as the most difficult method of setting diamonds because it does not involve the use of prongs or bezels, the technique appears to be in vogue among Swiss watchmakers this year. Roger Dubuis, Ulysse Nardin, and the experimental “hydro-mechanical” watchmaker HYT all employed it on new models released last month, to dazzling effect.

The Sparkling Blast from Ulysse Nardin offers the most dramatic example of invisible setting. Offered as a high jewelry companion to the watchmaker’s new Blast model, a skeleton timepiece featuring an automatic tourbillon coupled with a platinum micro-rotor, the diamond-set model is limited to six pieces, three in white gold on a white rubber strap and three in white gold on a deep blue alligator strap.

Encrusted with 211 diamonds totaling 13 carats, the 45 mm watch is composed of 85 distinct cuts that, when combined, evoke an exquisitely broken mirror. Fashioned in angular shapes, such as triangles and trapezoids, the stones decorate the brand’s signature “X” mark, which appears on the dial; the self-deploying buckle; and the crown, bezel, and index hands.

The invisible setting technique requires a hidden structure that showcases the brilliance of each stone while also making it appear as if it’s floating. In fact, each gem is affixed to the metal framework using small grooves cut into its base. The complexity of the method explains why the model retails for a cool $410,000.

The new Excalibur Superbia, a double flying tourbillon wristwatch, by Geneva-based Roger Dubuis is even more exclusive. Available in an ultra-limited edition of one piece, the model comprises more than 11 carats of diamonds and blue sapphires in tetrahedron shapes, invisibly set on a curved surface.

“No one was ever crazy or ambitious enough to do it on a masculine watch,” said Hélène Cristinacce, head of product marketing at Roger Dubuis, during a press presentation last month. “The ambition of the watchmakers was to create something so difficult that it would drive the stone setters crazy.”

Cristinacce revealed that the timepiece is set with 600 stones, each of which has to be cut with grooves to fit into the backbone structure supporting the gems. “It takes 30 minutes on average to mill one groove, then multiply that by two to three times per stone, and then by 600 stones, and that’s 750 to 800 hours of hard work—for something the client will never see.”

The watchmakers at HYT, the boutique Swiss watch brand that incorporates capillaries filled with liquids into its mechanical timepieces as a way to denote the time, also saw fit to use the invisible setting method on its latest timepiece, aptly named Flow.

“We have colored liquid that flows inside a tube of glass, the capillary, and it shows you what you have done (the past),” CEO Grégory Dourde explained during a media presentation last month. “The clear liquid is your imminent future (what is to come). The present, the now, is the exact boundary” where the two liquids meet.

The diamond version, which is filled with blue liquid, contains a dome at 6 o’clock composed of 73 invisibly set baguette-cut gems totaling 1.7 carats, all illuminated by 13 LEDs positioned below—“to give birth to the beauty of the stones,” says Dourde.