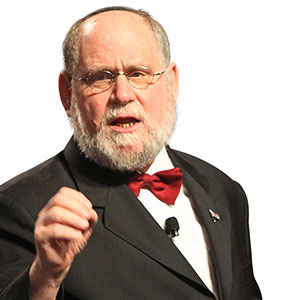 Last week, Martin Rapaport (pictured) lowered prices on the March 20 edition of his widely watched price list by an average of 7%, leading some companies to pull their inventory from RapNet, his online listing service. Afterward, following a vote of RapNet members, he agreed to suspend publication of his price list until May 1.

In a candid interview from his home in Israel, Rapaport discusses whether the boycott has hurt his business, his view of his list’s role, and if he agrees he has too much power.

What is your reaction to the latest furor?

People are boycotting us in the hope that they can blackmail me into not going down with diamond prices. Our job is to reflect what is going on in the market. We had to go down. When the market goes down, you can’t delay it. On RapNet, there are people selling at 50 below Rap. How can I not go down? Buyers will say, “You’re crazy if you don’t go down.” If the price list doesn’t reflect the industry, then it serves no purpose.

We are at the beginning of this. We can’t tell people things are the same when they’re not. I have a responsibility to communicate that things have changed. We have to be honest. We have to maintain credibility.

I’m not going to misrepresent prices. I’ve been doing this for 42 years. This is an oath.

A criticism that we have heard is, how can you lower prices when the market is virtually frozen?

There are always asking prices. There are always buyers. All the stores in the world can be closed, and there are buyers. You just have to find them, and you have to offer competitive prices. You can go to RapNet, you can see where the market sits right now.

You say that you lowered your prices because that’s where the market is. Yet, in the past, you have delayed price increases because you didn’t want to fuel speculation. Isn’t that a little contradictory—in that you want to reflect the market now, but not then?

The Rapaport list is a benchmark. It is not transaction prices. It’s an interpretation of prices. If you publish a benchmark price, you have a certain responsibility. It is very complicated. Let’s say the market is moving, and every week you go up or down 2%. That creates a cycle of expectations. People start chasing their tails. If we go up once, we would keep going up. So we wait to see how prices are shaking out before we make moves.

Why do people use the Rapaport list? Have you ever asked that? There are prices on RapNet. People can use those prices. But they want a credible benchmark. If there wasn’t the need for a benchmark, people wouldn’t use it. It’s a big advantage for the industry to have a standard to work off of. People want a benchmark that is sufficiently above the RapNet prices because that allows for profitability.

Making a benchmark is not the easiest thing to do. We have to balance different interests. It’s very complicated work. The sellers think that the only purpose of the list is to protect the sellers. They don’t understand that price information isn’t just for sellers. Buyers should know when prices are down. If prices are too high, then you are ripping off the jeweler; you are ripping off the consumer. If China is coming back to the market, don’t they need to know where the prices are?

The list is an opinion. It says on every page that it’s an opinion. It is our estimate of where prices are sitting. No one has to use it. There’s not a gun to anyone’s head. If you don’t like my list, make your own. There’s Nasdaq, COMEX. They all exist side by side. There’s plenty of room for competition.

Has the boycott hurt RapNet?

Sure. We are down a lot. It’s okay, because most of the market is closed. When they need liquidity, I am quite confident they’ll be back.

The industry has to ask itself, “Are diamonds a store of value or not?” If so, we need information, transparency, and competition to be the cornerstones of our business. That’s how it will grow.

If the World Federation of Diamond Bourses wants to create their own exchange, I’m not concerned about competition. That will help the movement toward electronic trading.

Will Rapaport survive? Probably. Is this good for the industry? I don’t think so. I am afraid for these guys. These suppliers don’t want to see prices come out. It reminds me of [the market crash in] 1982.

Following a vote, you have opted not to publish the list for a month. Did you decide to hold that vote because of the boycott?

No. We announced it before the boycott. We announced this after I had a conversation with industry leaders. They said, please consider that people are home, markets are closed. In 42 years, we have never not published the price list, but we have never had such a virus.

I’m not going to be moved by boycotts and threats. I wore a bulletproof vest for two years.

A lot of people will say that “one man,” meaning you, shouldn’t have so much control over diamond prices. Would you ever consider opening up the decision-making process, perhaps forming an advisory board or getting more input from others?

First of all, it’s not one man. There is a team of people at Rapaport. It’s an expert team. We look at RapNet, we look at Blue Nile, we monitor the discounts, we spend millions in research. If something happened to me, the list would still go on. That is why you have the Platts Oil price, Dow Jones Industrial Average. There is a high level of expertise required.

The bigger issue is, let’s say you had a committee. Who would they represent? Whose interests are they putting out there?

The World Federation of Diamond Bourses has said they were going to do a list. Why can’t they do it? Because if they did a price list, prices would have to go down. Do they want boycott and threats? Not many are going to handle that. It’s very difficult to do if you’re afraid of the political ramifications and everything else. I’m not going to keep prices high because sellers are going to yell at me and boycott me and blackmail me.

This is an open market. Anyone can put pen to paper and start a price list. People trust us because we have the guts to go down and take the heat. I don’t think anyone challenges the fact that prices went down. They just challenge that we published it.