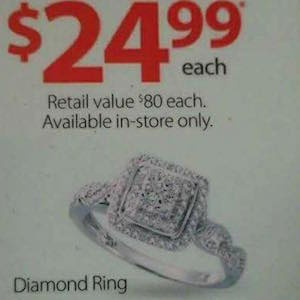 It all started with an ad, that’s been credited to Kay Jewelers, advertising a $24.99 diamond ring.

Even though the ring in question was billed as a diamond rather than an engagement ring, the ad still sparked a feverish debate—particularly on Facebook—about whether a woman should accept an engagement ring that costs $25. The story made local news stations; this post from Hawaii News Now attracted hundreds of comments.

My whole Facebook is having an entire debate on this whole $25 sale Kay jewelers had on an engagement ring.

In true Internet fashion, the opinions on both sides were equally vociferous.

Most of the comments were along these lines:

But some stuck up for the idea of spending money on an engagement ring:

Regarding the $25 ring topic.

Why are women shamed for having standards? Why are y’all guilt tripping women for wanting something nice? All women are different & have their own standards.

I can’t with the $24.99 engagement ring talk. You really expect someone to wear a piece of trash jewelry for life? That shit will tarnish in a month. I understand it’s “the meaning behind it that matters” but damn you can’t drop at least a rack on your future wife? Lol.

One story, on Stress Free Bride, even argued both sides.

My take is that, as we are all painfully aware, consumers now have the ability to buy whatever they want. We are no longer in a world where consumers can only go to two jewelers in town, and they both only sell diamond engagement rings. Today shoppers have unlimited choice. And they are taking advantage of it, even for tradition-bound occasions like engagements.

Millennials in particular are a cash-strapped demographic, and not all of them have the money—or inclination—to pay for an expensive ring. That’s something the industry will have to come to terms with and figure out how to respond to.

Still, to me, this debate shows the need for the industry to demonstrate the value of its products. The link between a diamond and love is clear and well-established. But while consumers don’t think twice about buying $300 sneakers, or $1,000 handbags, they regularly balk at spending a few thousand dollars on engagement rings.

And yet, it takes a lot of painstaking craft to make a ring (of the non-$25 variety). It also takes a lot of effort and money to get diamonds out of the ground. Plus, consumers are buying a product that is intended to hold its value and truly last forever.

Read any of the comments to any of these posts—it’s clear, many consumers don’t know all that. Perhaps that’s something the industry can think about how to rectify in the year ahead.

Still, in the end, perhaps the best response to the whole debate is this one: