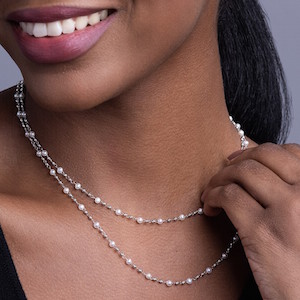 In the latest demonstration of the strength of the self-purchase market, new research conducted by Platinum Guild International (PGI) found that 50% of consumers who purchased fine jewelry in the last two years bought at least one piece for themselves.

That number grows when looking at female jewelry purchasers, with 73% saying they had purchased at least one piece for themselves.

She noted that women are buying handbags and shoes for themselves—and more need to consider jewelry.

“This sector of the market continues to increase, creating a greater opportunity for the jewelry industry to focus more resources on speaking to women directly,” she said.

Of those who purchased a piece of jewelry for themselves, 47% did so “just because,” PGI said, while 32% were marking a major milestone birthday.

The survey defined “fine jewelry” as items made with precious metals or gemstones that sell for over $1,000.