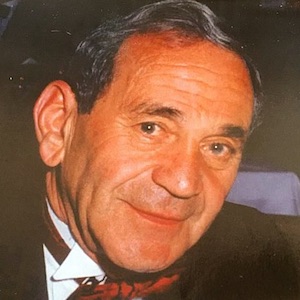 Banice Bazar (pictured), the owner and chairman of Imperial Pearl, died on Sept. 20 at age 90.

After he graduated from the University of Rhode Island with a degree in chemistry, Bazar served as an Army lieutenant during the Korean War, commanding a unit in the 388th Chemical Smoke Generator Company in Korea, which laid down the smoke screen to protect the infantry.

During one operation, the wind changed direction, leaving several soldiers trapped on the wrong side of the smoke screen. Bazar drove a jeep across the line to lead them to safety. He was awarded the Bronze Star for his heroism.

After he left the service, Bazar, whose father was in the jewelry business, started selling items out of the trunk of his car to the local Navy ships.

“I started hopping ships in the Newport [, R.I.,] naval base and at the Boston Navy Yard,” he said in an interview. “That was where I really started my business, with ship stores.”

Bazar soon decided to focus only on jewelry and opened Sentiment Jewelry. By the 1970s, it had acquired Deltah Pearl Co., Giovanni Jewelry Co., and Imperial Pearl Syndicate, eventually combining these companies under the umbrella of the Bazar Group.

“The pearl business in the 1970s was sort of on the downside,” he said. “It gave me the opportunity to purchase those [two pearl companies] and put them together.

“I was always fond of pearls, because to me that was the nicest pieces of jewelry you can buy: simple, not glittering, not flashing, not sparkling, but just subdued, beautiful. You really look at a pearl and see how much labor is put into it. An 8, 10 mm pearl can take five, six, seven years to make. You have a strand of them, just think of how many years it took to put this beautiful piece of jewelry together.”

In the interview, he noted with pride that the company just had two employees retire after 53 years.

Bazar was a member of the Providence Jewelers Club, the 24 Karat Club, and Cultured Pearl Association of America. He was also founding member of the Prime Jewelry Group and president of the Plumb Club.

He is survived by four children, 11 grandchildren, and 15 great grandchildren. He was predeceased by Beverly, his wife of 66 years; son Joseph; and granddaughter Danya.

Donations in his memory may be made to the University of Rhode Island Foundation to support the men’s basketball team.

A frequent advertiser, Imperial Pearl launched a lifestyle campaign in 2015.