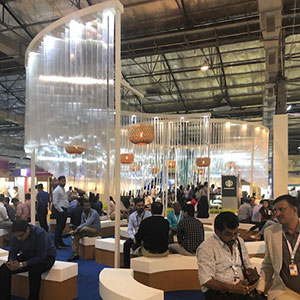 The 13th edition of the India International Jewellery Show Signature kicked off in Mumbai on Thursday, and the show floor appeared well-attended with plenty of activity taking place in the booths. In a press conference to inaugurate the show, Pramod Kumar Agrawal, chairman of the show’s organizer, the Gem & Jewellery Export Promotion Council (GJEPC), welcomed media and buyers, noting that 12,000 visitors and 700 exhibitors in 1,300 booths are participating in the event.

Exports are particularly important for the organization, and, unfortunately, policy issues and the coronavirus have been adversely affecting the sector. However, executives believe the downturn will be short-lived.

“Today, India’s gem and jewelry exports account for $40 billion, 12% of merchandise exports, and employ 5 million people,” said Agrawal. “GJEPC is working very hard to bring the target of $75 billion and an additional 2 million jobs over the next five years to fruition.”

As part of those efforts, the GJEPC is in the process of setting up a jewellery park in Mumbai and a gem bourse in Jaipur, entities that will train and educate manufacturers and help transform the sector.

“Let’s be honest, we’ve had difficult months,” offered Colin Shah, vice chairman of the GJEPC. “We’ve had the credit crunch, custom policy issues, and taxation that have made exports difficult. When the industry was recovering in December, the coronavirus hit. Having said that, we feel a positive sentiment for the Indian market for the second half of the year. Silver exports have really jumped. The lab-grown diamond industry has really grown, too. Once the worst is over and once the monsoons are over in the second half of the year, we’re back to a growth trajectory toward reaching $75 billion.”

China accounts for 20% of Indian exports. In April through December, before the coronavirus hit, Indian exports were trending down 5%. In the first quarter of 2020, Indian exports to China are projected to be down 10%–15%. “The coronavirus is a tragedy,” said Shah. “We’ve been messaging our Chinese trade associations and customers and we will, in these tough times, look at missed bills in a lenient fashion. All transactions over there have come to a standstill. Factories are shut. Banks are shut. We’ll have to be understanding in times like this.”

On a lighter note, the Artisan Jewellery Design Awards were held on Wednesday. The event honored Indian jewelers who designed pieces inspired by architectural eras, including Art Deco, Islamic Arabesque, and Neo-Futurism. A few show-stopping entries can be seen below.