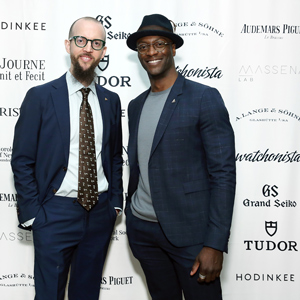 Black and Jewish watchmakers are underrepresented in the modern watchmaking industry—a reality the Horological Society of New York (HSNY) is making moves to rectify.

Both scholarships award individuals up to $5,000 annually.

The scholarships were designed to financially assist individual students, yes, but also to “encourage a stronger and more diverse industry [inclusive of] a broad range of backgrounds and experiences, and in turn, advance the art and science of horology,” HSNY said in a statement.

Benjamin Banneker (1731–1806) was a brilliant Black author, surveyor, landowner, farmer, mathematician, astronomer, and horologist. He built one of the first wooden mechanical clocks in North America in 1753; it was modeled after an imported pocket watch, and it ran for 50 years before it was destroyed in a fire.

“I’m proud of HSNY’s newest step towards building legacy,” said actor, horologist, and HSNY trustee Aldis Hodge (shown in the above photo, on the right) in the same statement. “I believe, with the establishment of the Benjamin Banneker Scholarship, we’ll be able to open doors of opportunity and light fires in the souls of the next generation of brilliant minds who’ll carry horology to its greatest potential.”

Oscar Waldan (1923–2018) was a Polish-born, Jewish watchmaker and the founder and former president of Waldan International. His introduction to watchmaking took place while he was imprisoned at the Buchenwald concentration camp, “where he befriended a watchmaker in the camp who took him on as his apprentice and subsequently, that skill saved his life,” according to the HSNY.

After the war, Waldan trained in horology in Switzerland and Germany, and held senior positions in both sales and design at Tissot, Universal Geneve, and the Holzer Watch Company. He was also an independent consultant for IWC, Rolex, and other brands in the 1980s. In 1979 he founded Waldan International, which produced private label collections of wristwatches for companies including Tiffany & Co., Tourneau, and Neiman Marcus. Eventually, Waldan designed and released his own line of Waldan Watches, a collection of high-grade chronographs and chronometers.

“It brings me great pride to launch this scholarship with the Horological Society of New York, in honor of my late father, Oscar Waldan,” said Andrew L. Waldan, CEO and president of Waldan International, in the same statement. “Education was one of my father’s greatest passions in life; he worked to enrich his own life with knowledge. And by offering this opportunity supporting talent where merited, we will contribute to the current and next generations of this great art form that connects so many around the world.”

The application timeline is Jan. 1 to March 1 (and will be every year). To apply, students should email a letter in PDF form to the trustees of the Horological Society of New York that includes “a biography, an explanation of their motivation to study watchmaking, and an explanation of how this scholarship would benefit the applicant,” according to the HSNY. Students must also send a resume, and it’s recommended they send reference letters as well.