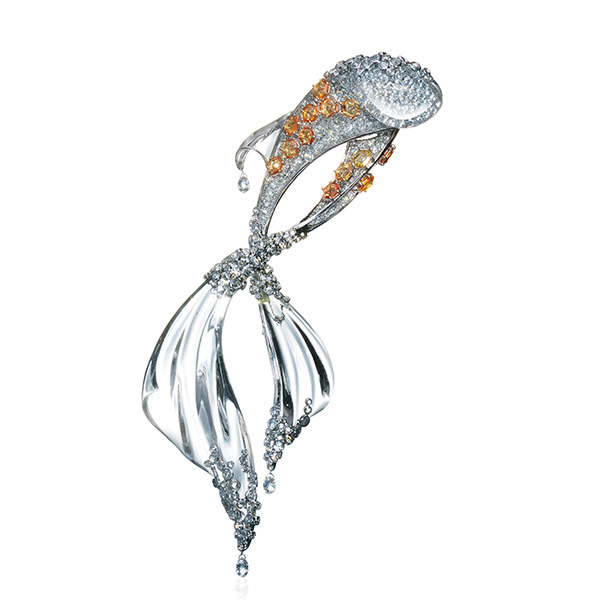 The 36th Hong Kong International Jewellery Show, at the Hong Kong Convention and Exhibition Centre, threw open its doors today to thousands of attendees. The show, underwritten by the Hong Kong Trade Development Council (HKTDC), counted 2,615 exhibitors from 38 countries with Jordan, Latvia, and Liechtenstein taking part for the first time. There are also new pavilions this year from Mexico and Indonesia, bringing more international brands to the event.

This year, the show made Japan its first-time partner country and collaborated with the Japan Pearl Exporters’ Association and the Japan Pearl Promotion Society. During a press conference on the first day of the show, Japanese trade executives said that Hong Kong and China have been top consumers of pearl jewelry since the 2008 economic downturn hit the U.S. and Europe, which heavily decreased demand in those two regions.

“We, Japan, historically are very well-known for pearls,” said Yoshihiro Shimizu, president of the Japan Pearl Exporters’ Association. “About 75 percent of our pearls is exported to Hong Kong. No wonder Hong Kong is a very important hub for selling pearls…because of the China market and, generally, Asian people like pearls very much. So, in the past 10 years that we’ve been participating in this show, every year the number of participants has been increasing. This year, there are 130 exhibitors promoting Japan’s pearl jewelry.”

Shimizu said that, although very important, Japan cannot solely rely on the China market because of the country’s economic instability related to what he called the “Trump shock” trade war. Shimizu identified India and Indonesia as possible emerging markets. “Luckily, pearls, compared with diamonds or gemstones, are very stable,” he said. “And we can also easily judge supply according to the demand.”

On the evening of the first day of the show, a black-tie gala dubbed “Dionysus” attracted hundreds of attendees, press, and actresses Carat Cheung and Toby Chan.

The show runs through Monday, March 4.

Top: We Are One brooch, designed by Jane Li, wins Best of Show and Craftsmanship and Technology awards at the Hong Kong Jewellery Design Competition.