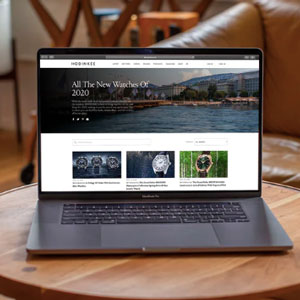 The jewelry and watch industries have a long history of rallying resources to help those in need during times of crisis. And the sibling industries are again rising to the occasion in the face of the COVID-19 pandemic that saw confirmed infections surpass 50,000 in the United States yesterday.

Efforts have largely focused on immediate needs—namely getting food to kids and families who don’t have enough. On March 18 we wrote about the dozens of jewelry brands who are donating to No Kid Hungry, which provides meals to kids who need them. And several brands, including Nora Kogan and Heavenly Vices, are donating a percentage of profits to Meals on Wheels, a crucial lifeline for the impoverished elderly in particular.

And as time in quarantine passes, we’re sure to see more peer-to-peer altruism.

Hodinkee kicked things off on that front yesterday. The popular watch retailer and media outlet announced in an “open letter to the watch community” that it’s opening up its e-commerce platform to physical retailers who’ve temporarily shuttered their shops and don’t have built-out e-commerce capabilities.

“At this point, most manufacturers have closed down, as have effectively all retailers in the United States and abroad,” Hodinkee founder Ben Clymer wrote in the letter. “These stores represent the most important part of the sales chain, and they typically operate on a thin margin with large overhead. I have already heard personally from friends at some of the most well-known independent watch stores in the country that layoffs are imminent, and with state-mandated closures of all non-essential businesses, they have zero lifelines to sell the product they have.”

Starting Thursday, and then on Tuesdays and Thursdays afterward, Hodinkee will “shine a light on an independent watch retailer, letting [consumers] know how exactly to communicate and work with them while their doors are shut,” Clymer explained. “We hope this will allow them to make some sales and continue along as they were.”

If you’re a watch retailer interested in being considered, email Hodinkee editor Cole Pennington at cole@hodinkee.com.

The company is also opening up its Watchville app to other independent publications, to help increase traffic to those sites. And the Hodinkee Shop is donating 10% of all sales to the Coronavirus Relief Fund.