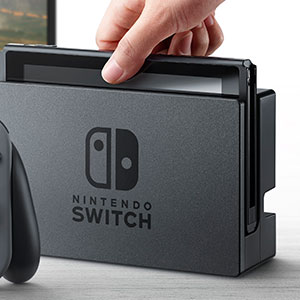 Helzberg Diamonds is offering a free Nintendo Switch system (pictured) to consumers that spend $1,199 or more this holiday season.

The video game console typically retails for $299. The promotion runs through Dec. 24.

That isn’t even the only tech toy Helzberg is offering as a free gift this year. It will also throw in a free Google Home Bundle—which includes Google’s answer to the Amazon Alexa—with purchases of $599 and more.

With analysts predicting hot holiday sales for the Nintendo Switch, Helzberg has been actively touting its promotion on social media.

In the ad posted to its Twitter feed, a woman declares, “I can’t believe you got me a tennis bracelet.”

Then a Nintendo-playing child chimes in.

“You can thank me for that. I showed my dad this deal at Helzberg,” he says. “He bought jewelry, and I got this.” The child looks at the camera: “It’s my finder’s fee.”

Your thoughtful gift just got smarter. Get a FREE Nintendo Switch system with your purchase of $1,199 or more. Shop gift guides here: https://t.co/luwArho8MX pic.twitter.com/XXhgHogCXk

While jewelry and video game consoles may seem like an odd mix, this is the second year in a row that the company has dangled a video game system as a bonus for a high-value purchase. Last year, it teamed up with Xbox to offer a free Xbox One S Starter Bundle with purchases of $999.99 or more. It also ran ads promoting that offer.

However, this year, Nintendo is not a participant or sponsor to the promotion, which requires shoppers to enter the code “Nintendo” with their purchase.

Helzberg is not the first jeweler to offer a coveted tech item as a holiday bonus. On Black Friday 2011, upstate New York chain Northeastern Fine Jewelry offered qualifying customers free units of the then pistol-hot iPad. The retailer told JCK customers were lined up around the block.