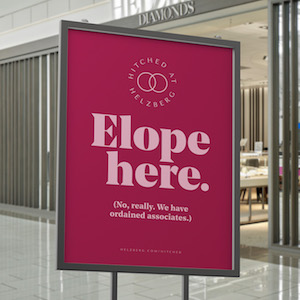 We’re going to the strip mall, and we’re gonna get married!

Helzberg Diamonds is letting customers tie the knot—for free—at any of its 200-plus stores.

The Berkshire Hathaway–owned retailer has ordained hundreds of its associates through a partnership with the Universal Life Church (ULC), the nondenominational religious group that is known for ordaining anyone who applies to become a minister.

“Since the program was announced, more than 900 associates have voluntarily gotten ordained,” says Wendy Gibbone, divisional vice president of store operations, via email. “We’ve also discovered that we were home to quite a few ordained associates already.”

This means that all the chain’s stores can now legally perform wedding ceremonies. In the handful of states that do not recognize ULC-ordained weddings, a “third-party officiant” is on hand.

To promote the new “Hitched at Helzberg” program, the retailer has put out signs saying “Elope here”—although the lucky couple still needs a marriage license, and depending on state law, a witness or two. Helzberg also recommends bringing proof of identity, as associates will request proof of names and ages.

Every couple who participates receives a custom celebration kit from Helzberg following the ceremony, which includes two champagne flutes, a bottle of Moët & Chandon rosé, and a commemorative marriage certificate.

While it may sound like a gimmick, Helzberg says it’s responding to changing attitudes among younger consumers. In a survey of 1,000 millennials, 91% said they would consider eloping, and 63% of already-married millennials said they would elope if they could do it all over again.

“We found that eloping is no longer viewed as a last resort, rather, it’s a preferred choice among millennials today,” says Gibbone, “primarily due to people’s preferences for more cost-effective and more intimate marriage ceremony experiences.”

Ready to make it official? We can officiate! Seriously. We ordained our associates. Now you can get the ring and get Hitched at Helzberg. Learn more here: bit.ly/2oGKFuc

Helzberg is not the first jeweler to offer in-store weddings, and on a few occasions, its stores have hosted ceremonies in the past. But it’s the first retailer to offer them at this scale—and likely the first to make them a regular part of its business.

The program kicks off Oct. 2. The first wedding under the new program is scheduled to take place this Friday in Concord, N.C.

“While we understand that our free marriage ceremonies are not right for everyone, we also know that we are a great choice for couples looking to get married their own way,” says Gibbone.

Although Helzberg isn’t requiring the purchase of a wedding or engagement ring, it clearly would be happy if couples bought them there.

Gibbone says, “If they trust me to marry them, I would hope they would trust me to help them pick out important jewelry purchases in the future.”