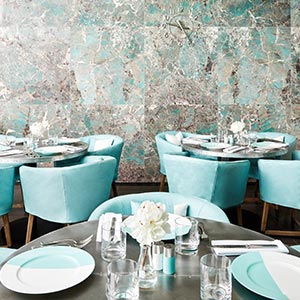 Four years ago, while mystery-shopping Tiffany, I asked the sales clerk if you can have breakfast at Tiffany. He said no, but that’s the question he’s asked most often.

That made me wonder: Why doesn’t Tiffany serve breakfast? Shouldn’t it give the people what they want?

And now—some 59 years after Truman Capote’s book, 56 years after the Audrey Hepburn romantic comedy, and 24 years after the Deep Blue Something song—you can actually have breakfast at Tiffany. Well, at one of them.

On Friday, the famed retailer will open the Blue Box Café on the revamped fourth floor of its New York City flagship. Its seats are coated in its signature robin’s egg blue and though it serves lunch, coffee, and alcohol, most of the attention has focused—of course—on breakfast.

While the items on the menu will rotate, for now the Café is offering standard New York City brunch fare, like seasonal fruits and berries, smoked salmon, and avocado toast. That, along with coffee, will set you back $29; even with food, the standard Tiffany markup comes into play. (The full menu can be seen here.) 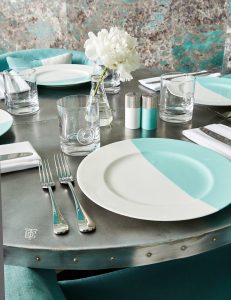 Will the morning meal at Tiffany prove as spiritually nourishing for visitors as it was for movie heroine Holly Golightly? Even though she was reduced to chomping on a croissant while gazing up at the store windows, she always made the pilgrimage to Tiffany because “nothing bad [can] happen to you there…It calms me down right away.”

While she may be a unique case, opening this café seems like a smart business move for Tiffany and a sign that is embracing the sometimes-racy film that many now associate with it. (In September, it paid $840,000 for the original script, making it the most expensive movie script every sold at auction.) It’s also a sign that, after years of uneven sales, Tiffany is diversifying its business.

Right next to the café on the revamped fourth floor is Tiffany’s new home and accessories section. That department has gotten much derision (and attention!) by offering “everyday objects” like a $9,000 ball of yarn and a $95 paper clip. One assumes it will also feature everyday objects that everyday people might want to buy.

Even redesigning the fourth floor is a big departure for the store. As Racked noted recently, for the most part, the flagship doesn’t look that all that different from when the movie was shot.

The café is also part of a growing trend toward retail restaurants. The London Ralph Lauren store is opening a coffee bar; Saks Fifth Avenue’s flagship now houses a Paris café. That itself plays into the larger trend of retail-tainment and making stores an experience. So now, instead of just a place to gawk and shop, the Fifth Avenue Tiffany lets you hang out, eat, and pay tribute to Audrey Hepburn.

At this point, there is only one Blue Box Café, and a spokesperson says there are no plans to open others. But it seems like a no-brainer. Here’s hoping future versions play “Moon River”—or maybe just Deep Blue Something—on an endless loop. 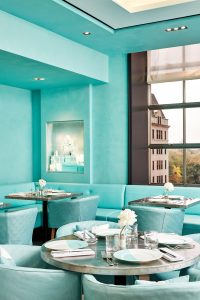