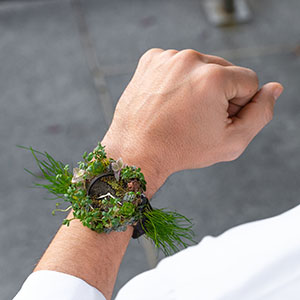 Last year, Swiss watch brand H. Moser & Cie posted a series of videos that showed its CEO, Edouard Meylan, talking to an ad agency about a campaign for its Pioneer watch.

In the first, the agency suggests a campaign built around passing the watch on to his son. Meylan flashes on his son partying and decides, “He’s not getting my Pioneer.” He also gives the thumbs-down to ads built around a sports celebrity and showing a man against the elements. By the time the exhausted pitchman has unveiled his latest brainstorm—an ad extolling Swiss craftsmanship—Meylan has stormed out, leaving a statute of a gnome—or maybe it’s a troll—giving the marketers the finger.

This pretty much sums up H. Moser’s decidedly offbeat approach to watch marketing. In a typically genteel industry, its promotions have gained attention by taking clear aim at its comrades’ ads. Sometimes the send-ups are gentle; other times they seem to actively give their colleagues the finger.

Meylan—whose family company, MELB Holding, took over H. Moser in 2013 (his father was CEO of Audemars Piguet)—says that the company does so many attention-getting campaigns because, well, they get attention.

“As an independent brand, we have no choice but to be different,” he says. “We have a young dynamic entrepreneurial team trying to be direct and authentic. We are using humor and provocation.”

And yet, two things make Moser’s ads different from the marketing equivalent of clickbait. First, the ideas and execution are genuinely clever, creative, and funny. In addition, the concepts have a serious undertone and address “subjects that are important to us,” Meylan says.

In 2016, as the watch industry fretted over Apple’s smartwatch, Moser introduced the Swiss Alp watch. (Get it? Alp, Apple.) In the slick introductory video Meylan made Apple-esque pronouncements about how his watch, which clearly aped the smartwatch’s design, “might simply change the world.” The new product, he intoned, boasted a “revolutionary power source” (a dial) and “lets you reconnect with people” by “get[ting] a life.”

Meylan says, behind all the jokes, the ad was meant to point out the benefits of traditional Swiss watchmaking. The Swiss Alp watch “does not allow the wearer to make calls, hunt Pokémon, or to try out the latest Snapchat filters,” said a release. “[It’s an] instrument for measuring time rather than consuming it.”

And while not everyone in the media loved it—Engadget called the watch an “unabashed rip-off”—plenty talked about it. Like Apple, Moser has since released new editions—the Swiss Alp Zzz, which is so minimalist, it doesn’t have numbers, and the Swiss Alp Concept Black, which does away with hands.

In 2017, Moser released the Swiss Mad watch, which aimed to be the “most Swiss watch ever” by making its case out of Swiss cheese (mixed with a base metal). Again the underlying message was serious—Moser feels so strongly about lax enforcement of the “Swiss made” label that it refuses to use it. But the message was delivered with a deft, self-satirizing touch:

That year, the Swiss Alp and Swiss Mad watches were sold together by Christie’s for CHF 100,000 (about $100,000), with proceeds going to the Foundation for Swiss Watchmaking Culture.

In 2018, Moser made its most provocative move yet by releasing the Swiss Icons watch, a “Frankenwatch” mash-up of elements of competing brands. The accompanying video threw some sharp jabs at fellow watch companies, griping that industry visionaries have “been replaced by marketers”:

This also got tons of publicity—but a stronger negative reaction than usual.

“I’m of two very different minds about this sort of thing,” wrote Jack Forster in Hodinkee. “It takes a certain determination to run the risk of insulting six fellow Swiss watch brands at once, but at a certain point, I wonder if ensuring the biggest buzz about your watches…might not be a distraction from the other values that will make or break the brand’s prospects over the longer term.”

Other publications mused about possible lawsuits. While Meylan says that wasn’t a factor, he quickly pulled the product. The video is no longer on its YouTube page.

Clearly, the backlash was a little fiercer than anticipated. “We are small,” Meylan told a watch publication shortly after pulling the piece. “We are very fragile. And if they want to kill us, whoever it may be, they can kill us.”

This year’s release was a little less controversial, if typically offbeat.  The Moser Nature watch, made up entirely of Swiss plants, symbolizes the brand’s commitment to “green” its operations and use fair-trade materials. The accompanying video struck a more straightforward note than usual.

There is a strategy here, though Meylan says the brand stumbled on it in an unexpectedly serious way.

In 2015, the Swiss National Bank removed the cap of Swiss franc, sending shock waves through the industry. Meylan penned what he calls a “provocative open letter” to the bank’s chairman, all but begging him to be mindful of smaller companies like his.

“There was a big roar,” he says. “That letter got everywhere throughout the world. A lot of people wrote about it. It was quite provocative. It made us realize that, even though we are small, we still have a voice. We can still express our values and our ideas in a way that will create discussions and arguments.”

He admits Moser’s campaigns can draw strong reactions, but he has come to accept that not everyone will love what it does.

The promotions “create real fans. And some people say, ‘This is stupid. This is wrong.’  You have to be ready to get criticism and try to take it constructively. In the era of social media, you need to be ready for it. You take it very personally in the beginning, and then you realize it drives sales.”

Meylan says that the brand plans to continue on this path as long as it keeps coming up with good ideas. But it’s also looking into less offbeat approaches.

“You don’t want to do something gimmicky or just for the sake of creating a buzz. We have 191 years of history. I still have people who know Moser just as the brand with the cheese watch. We need to go beyond that and increase knowledge about the brand.”

And he admits what it does isn’t right for every brand, particularly the big ones.

“In our community we have people who love what we do and wish they could do the same. But they don’t think it elevates the brand. They don’t have access to the data that I do.”