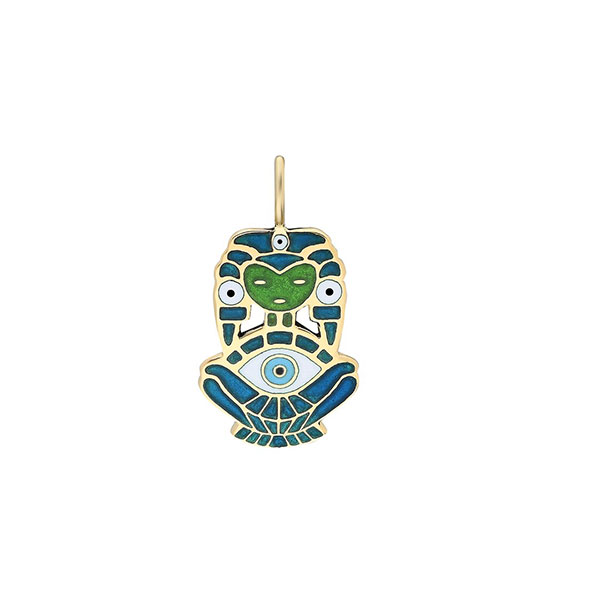 In 2019, two longtime friends—Puerto Rican native Inés Capó and Äfet Burcu Salargil, who is based in Istanbul—founded İTÄ Jewelry (the name is a fusion of Inés and Äfet) to create fine jewelry keepsakes that celebrate various cultural traditions, beginning with the folklore of the indigenous Taíno people, who settled parts of the Caribbean, including Puerto Rico.

ITÄ’s sophomore collection, Encantada, is composed of five distinct lines that honor different aspects of Puerto Rican and Taíno heritage. The collection, which retails from $400 to $3,500 and is manufactured in Turkey, interprets stories of goddesses, demons, and sacred places in 14k gold, diamonds, and colored stones.

“There are a lot of very talented artisans that use petroglyphs from our indigenous ancestors and use the flora and fauna of our island to inspire them and they create beautiful pieces,” Capó says. “But from a fine jewelry standpoint, to create in a more literal sense pieces that carry that meaning, I had not seen anything. And being someone who had lived both on and off the island, I was really craving something like that.”

We asked Capó to share with us the folklore that inspired some of ITÄ’s most popular styles.

Named for the Taíno deity Atabey, ruler of the sun and the moon and the goddess of fertility, the Atabex collection features a representation of the goddess rendered in styles marked by the use of negative space as well as colored enamel.

“Atabey is the mother of all Taínos,” says Capó. “For Taíno culture to revere women the way they did, it’s so special and so important because it’s such an ancient culture and such a powerful statement of womanhood.”

In ITÄ’s rendition, an element of Turkish culture is also embedded in each piece: “We really wanted to protect her womb so we put in an evil eye,” says Capó.

At first glance, the Keko & Kiki line is a charming homage to frogs. But this isn’t just any amphibian. It’s the coquí frog endemic to Puerto Rico. And in ITÄ’s version, it is lovingly re-created as stud earrings, pendants showing the coquí outlined in gems such as pink sapphires and green tsavorites, and macrame bracelets.

“It’s our truest best seller and also our most robust line from Encantada,” she says.

The sun motif is consistent across the range and is most eye-catching in various styles of 14k gold ear jackets, set with white, black, or cognac diamonds. All of ITÄ’s earrings are sold individually to encourage people “to create their own ear story,” says Capó.

In the Taíno language, macu means “big eye,” and is associated with the legendary figure Macocael—“He of the Unblinking Eyes.”

“He had no eyelids, which was very important because he protected a very sacred cave, where all the Taínos were supposed to come from,” says Capó.

When Capó and Salargil were looking at the patterns on Taíno pottery, the eye motif “just jumped at us.” One reason it resonated so strongly was because it was consistent with nazar boncuk, the Turkish eye of watchfulness and protection.

The swirling motifs of the Txirimiri range are borrowed from petroglyphs found near rivers in Puerto Rico and across the Caribbean, says Capó. But the motif, which denotes the movement of water, is also common to other places, such as Greece and Turkey, where Capó and Salargil have spent time.

“It’s such a universal symbol, so we made the most of it,” Capó says.

Incidentally, txirimiri is taken from Basque, where it means “light rain,” a subtle homage to Capó’s family, half of which hails from Basque Country.