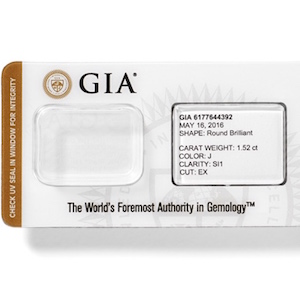 The Gemological Institute of America’s grading lab is suspending its diamond sealing service for the second time in six years, after a likely fraudster replaced untreated diamonds in a sealed packet with treated stones.

The suspension, which is effective immediately, stems from the lab’s discovery that an unspecified “small number” of its sealed packets had been compromised after they left GIA. According to GIA, the untreated diamonds originally in the packets had been replaced by natural diamonds treated by the high-pressure, high-temperature (HPHT) method. The treated stones were physically and visually similar to the original gems, says a spokesperson.

A sealed diamond is placed in a package that is meant to be secure and tamper-resistant. The lab offers diamond sealing as an additional service, generally for the investment market. Just one-tenth of 1% of the stones that are graded by the GIA lab are sealed.

The lab is still investigating the “source and method” of this alleged fraud, including just how the packaging was breached.

This is the second time the GIA has suspended its sealing service. The first time, in 2014, it discovered that someone switched out a sealed diamond with a stone of lesser quality. The service was reinstated several months later, after GIA implemented additional security measures.

Any person with concerns about a sealed diamond may submit the gem to a GIA lab for a free verification.