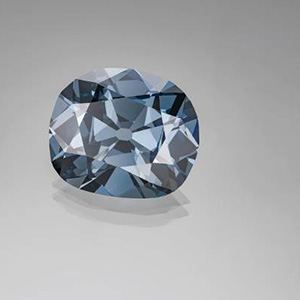 But where do those diamonds get that color? It turns out the answer to that question is, well, kind of deep.

According to new research by Gemological Institute of America (GIA) research scientist Dr. Evan Smith, blue stones form in the depths of the Earth, far lower than most white diamonds.

Smith, who published his findings in the most recent edition of the journal Nature, says this answers “a geographical enigma”: The color of blue diamonds is caused by boron. And yet none of that element is found in the Earth’s mantle, where most diamonds form.

But after studying numerous inclusions in blue diamonds, Smith concluded that those gems were formed in the lower mantle of the Earth, more than 660 kilometers down. By contrast, most diamonds are formed at depths of 150 to 250 kilometers. Until recently, the lower mantle was not believed to contain gem-quality diamonds.

Yet in that “super-deep” part of the Earth, the boron that colors blue diamonds may have originated in the ancient seafloor, Smith says. Those diamonds then rise to the Earth’s interior through the process of subduction, where one geographic plate sinks to the level of another plate. (The subduction process also produces earthquakes and tsunamis.)

Of course, this doesn’t happen all that often—one reason why blue stones are super rare and valuable.

Smith has called diamonds “a window into the deep Earth,” and his study has helped not just  the understanding of diamonds, but also the elemental forces that shaped the Earth, GIA says.