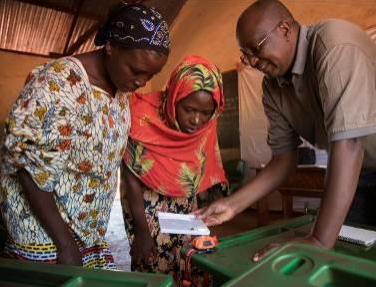 The Gemological Institute of America (GIA)—in collaboration with nonprofit international development organization Pact and the Tanzanian Association of Women Miners (TAWOMA)—has initiated a pilot study to test a new rough gem guide developed to offer “basic gemological and market knowledge for artisanal miners in gem-producing regions,” according to a prepared statement from GIA.

The illustrated booklet is available in both English and Tanzanian Swahili and was distributed to approximately 45 women miners in the Tanga region of Tanzania.

“This project is at the very core of GIA’s mission,” said GIA president and CEO Susan Jacques in the statement. “We are moving practical gemstone education as far up the supply chain as possible, to people who can benefit tremendously from greater understanding of the beautiful gems they bring to market.”

The booklet, Selecting Gem Rough: A Guide for Artisanal Miners, was developed “by a team of GIA gemology, market, education and design staff working in consultation with colored gemstone experts who have extensive experience buying gems in rural areas.”

According to the statement, GIA Distinguished Research Fellow Dr. James Shigley originally conceived the project, which “is part of the Institute’s mission-driven effort to share gem information and related skills throughout the gem and jewelry industry supply chain and with the public.”

The costs for the pilot—approximately $120,000—were paid from the GIA endowment fund. GIA provided the booklet and training at no cost, and “the booklet will remain free of charge as the Institute expands the training to other small-scale rural miners in East Africa later this year.”

Photo: Marvin Wambua, GIA GG (right), helps participants in GIA’s pilot program examine a gem in the translucent tray included with the booklet Selecting Gem Rough: A Guide for Artisanal Miners. GIA and Pact distributed the booklet and plastic trays to dozens of miners in the Tanga region of Tanzania in January 2017. (Photo by Robert Weldon for GIA.)