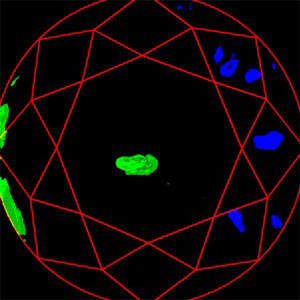 The Gemological Institute of America’s (GIA) diamond grading lab has developed a system, working with IBM, that will use artificial intelligence to largely automate its diamond clarity grading.

The new clarity grade system is currently in use the GIA’s laboratories in New York City and Carlsbad, Calif., and could soon be expanded elsewhere.

“Clarity has been the last frontier,” he says. “It’s complex. It’s very hard to image. We have to assess the size, number, nature, and type of many different characteristics. Then we have to factor in all those dimensions and interpret them together.”

He notes that GIA has been trying to try to automate clarity grading for more than a decade. It ended up turning to IBM, a leader in artificial intelligence, to help develop this new system.

The new method has several advantages, says Moses. For one, it’s quicker.

“This automation will allow us to grade more stones, smaller sizes, and to do it more efficiently,” he says.

It is also generally more consistent, he says: “We have already determined the repeatability is higher with machine learning. It isn’t across all grades yet but for the majority of the grades it has demonstrated more repeatability.”

The system will eventually mean “less human intervention,” but Moses believes there will always be a place for humans in the grading process, particularly with more important diamonds.

“There will likely be some human intervention is some cases. Gemstones are unique. You really need that raw intelligence developed over decades. I wouldn’t say that one day you just put this thing down in the machine. There is treatment detection, there’s a lot of nuances that have to be factored in. The human visual system is complex. It’s hard to find a camera and lens that completely does what the human visual system does.”

“Innovation will continue and expand into certain categories of stones. We will see a lot more automation, and a lot more innovation coming into this space.”

Top: A snapshot of the new software determining a clarity grade (image courtesy of GIA)