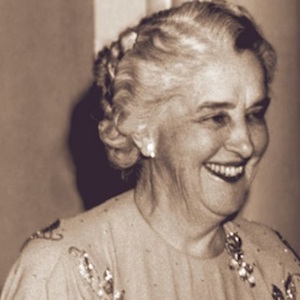 The Gemological Institute of America (GIA) and the American Gem Society (AGS) are teaming up for a new scholarship named after Beatrice Shipley (pictured), the wife of Robert M. Shipley, who founded both groups in the 1930s.

The Beatrice Shipley Scholarship will allow one AGS member to undertake the GIA Graduate Gemologist program on campus, with funding by a grant from the GIA Endowment Fund and the AGS Way Course.

While Robert Shipley, who was named JCK’s person of the century in 2000, is generally credited with founding the AGS and GIA, the two groups’ current heads—both women—say no one should underestimate the behind-the-scenes contributions of his wife.

A gifted businesswoman—at a time when few women were in business—Beatrice Shipley worked as a former church administrator, school dean, and art gallery owner before her financial and managerial support helped launch both GIA and AGS. There is more biographical info about her here.

“Neither AGS nor GIA would exist today if it were not for Beatrice Shipley’s contribution to our founding and success,” said Susan Jacques, GIA president and CEO, in a statement.

Added Katherine Bodoh, CEO of the American Gem Society and AGS Laboratories, in the same statement: “Being able to honor Beatrice Shipley, and the representation of the relationship between the AGS and GIA in working together to complement one another, is significant and meaningful for us.”

In addition, as it’s done in past years, GIA is offering $2 million in scholarships for aspiring or current jewelry professionals interested in taking its courses in 2020.

Since 2010, GIA has awarded more than $10 million in scholarships, which have gone to more than 2,000 students.

(Image courtesy of the Gemological Institute of America)